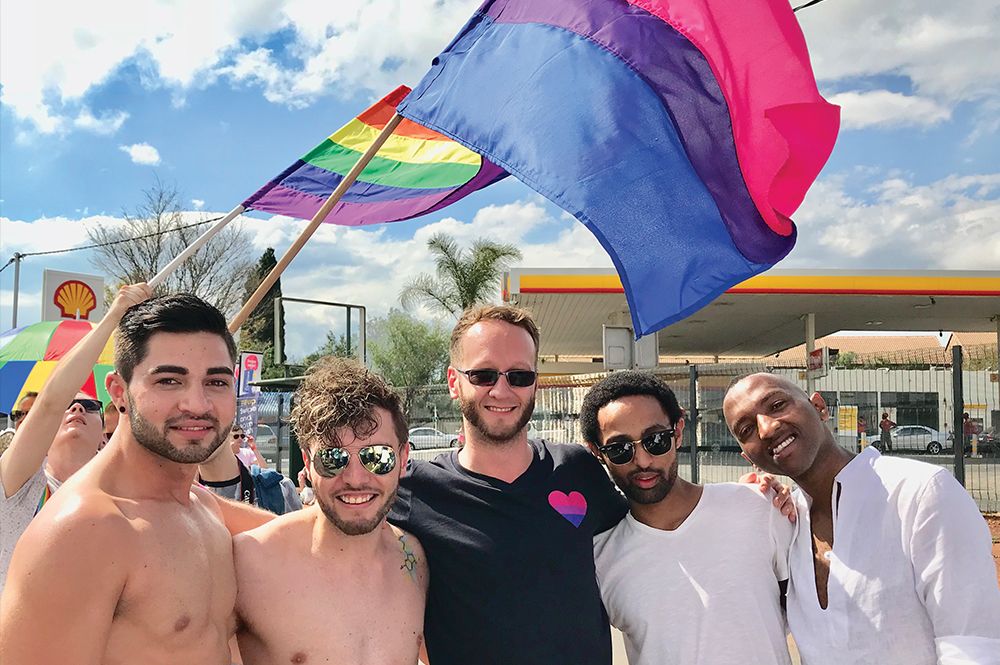 It has become a bit of an alphabet soup acronym, hasn’t it? The LGBTQI+ umbrella term hoping to encompass all minority sexual and gender identities, and only one starting point for understanding physical sex, sexuality, gender identity and gender expression. At any rate, here I am! Smack bang in the middle of it: ‘B’ for bisexual. Sometimes feeling slightly affronted when others believe that the term is merely a convenient place to ‘park’ before you acknowledge that you’re gay.

Explaining to people who are not bisexual how I experience my feelings, emotionally and physically, is tough and challenging. I often sense a level of confusion from the listener, more so if they’ve boxed themselves as either gay or straight. I am not the first bisexual person that share these sentiments. But I am going to try to explain it; so here goes.

I am a guy, and as far back as I can remember, I have been attracted to both men and women, physically and emotionally. However, having been attracted to men, I always thought, out of ignorance and lack of knowledge, that I must be gay.

In high school, I kissed a girl for the first time. It was a sympathy kiss. One of my friends asked if I had ever kissed a girl and I said confidently “sure!” Then she asked me to kiss this other girl who was a friend of hers because she had never been kissed. Fuck me, right? Well, she was actually quite attractive and a pleasant person, and – surprise, surprise – there was a Cirque du Soleil in my pants as I kissed her. “Wow, I really enjoyed this,” was my first thought. “Am I actually gay?” was a thought that followed soon after.

Shortly after this first kiss I had my first girlfriend. Thinking back, that kiss and the party in my pants were just what I needed to be self-confident enough to pursue my first relationship with a girl.

Just before I started dating my first girlfriend however, I also started falling in love with my best friend at the time. I actually was utterly smitten by him. He had a bubbly personality and dashingly good looks without even trying. Being best friends we spent a lot of time together, which certainly did not help with any of the confusion I was experiencing! Here I was dating a beautiful girl, with whom I had great sex, while at the same time I could not get this friend of mine out of my head. Our paths naturally went in opposite directions when we went to university and started growing up.

I met my wife at university. We started dating in our final year and seven years into the relationship I just could not handle the frustration of this secret I was carrying around anymore. I went to an LGBTIQ+ affirming clinical psychologist to talk about everything going on in my head. It soon became evident that the longer I was going to wait before coming out to her, the more frustration I would experience, and the more difficult our relationship was going to get. So I decided to do it on one fateful Saturday morning in May 2013. Tears were shed. Doors were slammed. Wine was drunk. You know, as graceful as any category 4 hurricane can be.

Whether you’re newly coming out or a veteran bi activist, there comes a point when it’s time to stop talking about abstractions and to start living as bi people.

Therapy helped tremendously, as well as the fact that I wasn’t seeing anyone else at the time. Also, I didn’t tell her with the intention of breaking up; I just needed to get it off my chest. Our strong, caring and trusting relationship was also an important success factor. Coming out to her was a massive relief to me, but that was only the start… I am happy to say that one year later we got married. But my attraction towards men never went away. As a matter of fact, it became more pronounced and intense, occupying my mind incessantly. For me, I also have a strong yearning for an emotional connection with a man, not just physical. I have had to think hard about how to articulate my feelings, as I truly feel that people just don’t understand it. Imagine the feeling you get when you’re away from home, and you miss a specific someone. Imagine the most intense feeling of missing someone you’ve ever experienced. Now imagine that you carry that feeling around with you every day, but you don’t know who you’re missing. That is the best way I can describe it.

My wife and I are slowly working on becoming ethically non-monogamous. I guess you can say we are working towards polyamory, which is the practise of more than one intimate relationship with the knowledge and consent of all partners. This process is tough at times, but I am confident that we’ll reach a happy place soon. It is the first time in my life where the feeling of “something is missing,” is starting to subside. This to me is a good feeling and the prospect of having some sort of an arrangement with a guy excites me.

I want to emphasise that bisexuality is a very complex sexual orientation. That’s probably because bisexuality comprises the whole spectrum between straight and gay. People experience their bisexuality in many different ways. There are endless permutations. Some people are polyamorous, while some people are monogamous. Sequential bisexuals are happy with a specific gender with which they are currently in a relationship, whereas others are concurrent bisexuals, having a desire or a need to have sexual, or even just emotional needs satisfied by more than one gender at the same time. Some bisexual people also experience an ebb and flow in their attractions; where the intensity of attraction to a specific gender varies over time.

I also started coming out to good friends and family in October 2016 and in July 2017 my wife and I took a trip down to the Western Cape to tell both my parents and her parents that I’m bisexual. The liberation, freedom, self-acceptance and identity development associated with coming out is not only profound, it speaks to the core of our beings.

The fact that bisexuals are often the most forgotten minority of the LGBTIQ+ community just exacerbates feelings of isolation which is already prevalent in our community. That is why I started amBi South Africa. amBi South Africa is a social and support community for bisexuals, our friends and allies. Our mission is to build a vibrant and visible bisexual community here in Gauteng, and hopefully the rest of South Africa when we’re more established. It is a diverse social group that hosts public and private events and activities.

Whether you’re newly coming out or a veteran bi activist, there comes a point when it’s time to stop talking about abstractions and to start living as bi people.

It is often easy to forget that our sexuality is ultimately about how we love. That sexuality is about love – a love that transcends the boundaries of sex and gender. It is not up to others to give us the affirmation all humans need. It is up to us to give that acceptance, love, and respect to ourselves and to each other and then build upon that foundation together.

If you are interested in joining, please register on meetup.com at www.meetup.com/amBiJNB/.