CORONAVIRUS LIKELY MUCH LESS OF A KILLER THAN EXPECTED 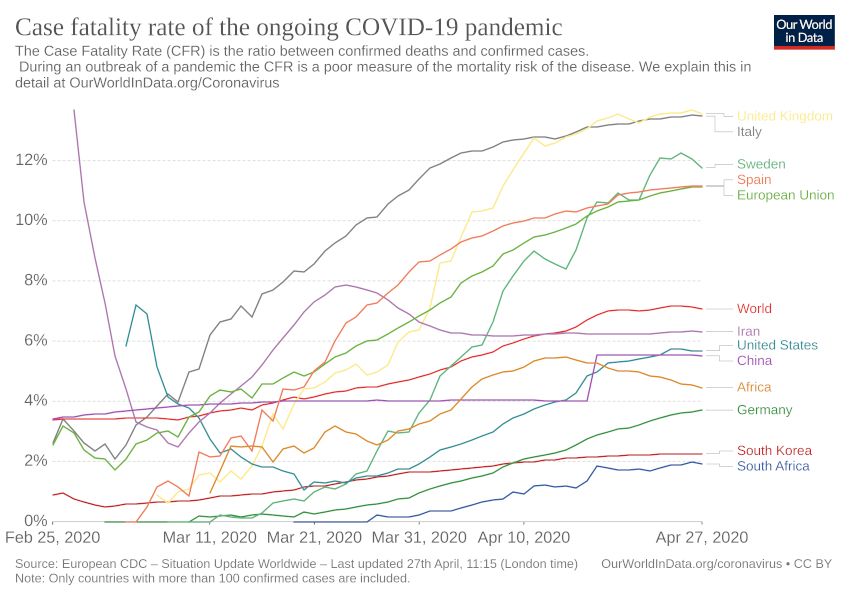 Since the beginning of the Covid-19 outbreak, we’ve been hearing all about the case fatality rate of the disease, which in some countries, including the European Union on average, runs above 10%.

This sounds positively terrifying, and is one of the reasons the general public meekly accepted draconian lockdown measures imposed by authoritarian governments and petty tyrants the world over, at terrible personal cost.

The global case fatality rate – defined as the ratio of confirmed deaths to confirmed cases – now stands at 7%. In Belgium, it’s 15.4%. In the United Kingdom and Italy, it is about 13.5%. In the United States, it’s 5.7%. By comparison, South Africa’s case fatality rate, at 1.9%, is relatively low by world standards. In a ranking, SA comes in at 102nd out of 138 countries that have published Covid-19 statistics.

One immediately wonders, then, why case fatality rates differ so much between countries. There are many factors that influence how deadly the disease is in a given population. Climate plays a significant role, as does the age distribution of the population, its general health profile and various other demographic factors, and its standard of medical care.

A major factor in the fatality rate is the capacity of healthcare systems, which in most of Covid-19 hotspots means government-run hospitals, to accommodate a surge in admissions of severe cases. This depends not only on the number of available beds, but also on equipment such as ventilators, and the availability of critical care doctors and nurses.

The response around the world (with the notable exception of Sweden, which is doing just fine) has been to ‘flatten the curve’. The purpose of this policy is not to reduce the ultimate number of infections, but to slow down the spread of the virus so that criminally unprepared public health systems have time to do what they should have done months and even years earlier, and prepare for the pandemic.

‘The presence of a large reservoir of SARS-CoV-like viruses in horseshoe bats, together with the culture of eating exotic mammals in southern China, is a time bomb,’ wrote Chinese scientists in a 2007 paper.’

Yet despite ample warning that a fast-spreading and deadly global pandemic was just a matter of time, most public healthcare systems kept running near capacity under ordinary circumstances, and were totally unprepared for a fast-spreading pandemic. Notably in Italy, but also elsewhere, this contributed to the relatively high case fatality rate of Covid-19.

If these countries had begun to prepare their emergency response when the WHO declared Covid-19 to be a Public Health Emergency of International Concern on 30 January, or better yet, when Taiwan pulled the trigger on its emergency response on 21 January, even before China did, many thousands of lives could likely have been saved, and the disruptions brought about by hard lockdowns might have been avoided.

In short, lockdowns and the economic disaster and starvation they cause are the price we are paying for the failure of public health systems to prepare for an event which was widely predicted.

Be that as it may, the problem with case fatality rates, as OurWorldInData points out, lies with the denominator. It counts only those who have tested positive for Covid-19, not the total number of people who have been infected.

A better indicator of the deadliness of the pandemic can be gleaned from the crude mortality rate. This differs from the case fatality rate in that it divides the number of confirmed Covid-19 deaths by the population.

This measure does not, however, distinguish between countries which are in the early stages of the pandemic and countries that have already seen the worst. In the worst-affected European countries – and indeed around the world – the number of daily confirmed cases has begun to decline. In South Africa, for example, it has not.

Another way to estimate the real spread of the virus throughout the population is to see how many people test positive out of the total tests conducted. If that percentage is high, the spread is probably much further advanced, and much higher than confirmed cases. If it is low, then the disease has not spread very far yet.

In the UK, it takes 3.7 tests to find one infected person. This suggests that a very large portion of the population is already positive. In Iran, it’s 4.7, in the US, 5.8, and in Italy, 9. In South Africa, number of tests per confirmed case is 38.7. This, again, suggests it has not spread that far locally.

Towards an estimate of infection fatality rates

Until recently, estimates of the real infection fatality rate – that is, the true chance that you’ll die if you contract the disease – have been impossible to calculate. The only people who got tested were those who sought medical care, or those who were suspected to have been in close contact with others who tested positive.

To find an infection fatality rate would require testing a representative sample of the population for antibodies against the virus, and such surveys had not been conducted. These are called serological surveys, or seroprevalence studies.

Such surveys are now being conducted worldwide, however, and the first tentative results are starting to come in. Although some have rightly been challenged on grounds of statistical methods, or the reliability of antibody tests, these studies are starting to show a distinct pattern.

A Stanford University survey of 3 300 people in Santa Clara concluded that between 2.4% and 4.1% of the population have already been infected, exceeding by a factor of 50 to 85 the number of confirmed cases. This gives an infection fatality rate of between 0.1% and 0.2%.

In Gangelt, Germany, a town particularly badly affected by Covid-19, a study conducted by Bonn University found a 15% prevalence rate, which translates into an infection fatality rate of 0.37%.

In the Netherlands, a survey of blood donors found a prevalence of 3%, suggesting an infection fatality rate of 0.6%.

In Iceland, which has tested a larger share of its population than any other country, between 0.3% and 0.8% of the population has been infected, resulting in six deaths. This works out to an infection fatality rate of between 0.2% and 0.55%.

In Los Angeles County, the preliminary results of a seroprevalence study found that between 2.8% and 5.6% of the population was already infected, which is 28 to 55 times higher than the number of confirmed cases reported. This suggests an infection fatality rate of between 0.1% and 0.3%. The lower end of that range is about the same as for the seasonal flu.

In Chelsea, a high-density city bordering Boston, Massachusetts, a serological study of two hundred people with no symptoms found that a third had coronavirus antibodies. Again, that would suggest the infection-fatality rate is low, at 0.3%.

In Miami-Dade, prevalence was found to be about 6%, more than 15 times the official tally, giving an infection fatality rate of about 0.15%.

Two studies conducted in Stockholm, Sweden, found an infection prevalence of 11% and 33%, respectively, although the author of the first study acknowledged that the second study is likely closer to correct. At the time, the country stood at 1 540 deaths in a population of 10.2 million, resulting in an infection fatality rate of between 0.045% and 0.137%. This is right around the infection fatality rate of the seasonal flu.

No such studies are available for South Africa, but under-detection, especially of asymptomatic carriers, has been flagged as likely.

Although these results are still preliminary, need to undergo peer review, and need to be verified by further, larger-scale tests, all ten of the studies found infection fatality rates well below the 0.9% on which the Imperial College model that informed the UK’s policy response was based. This suggests that last month’s Oxford University study (archived copy), which challenged the Imperial College model, may be correct in finding that the virus had already spread far beyond the official number of confirmed cases, making the infection fatality rate much lower than initially feared.

This would suggest that the severity of the pandemic was substantially overhyped, initially, based largely on bad data from China and an overwhelmed public health system in Italy.

The South African government has not released the model on which it based its decision to enter the most draconian lockdown on the planet, precipitating a cascade of unemployment, business failure, hunger and starvation.

However, the former head of the National Institute for Communicable Diseases, professor Shabhir Madhi, has been quoted saying that the modelling was ‘flawed and illogical and made wild assumptions’.

That model predicted that 600 patients would need ICU treatment by 1 April. The lockdown, which only started a few days earlier, could not have significantly affected this prediction, yet by 18 April, there were still only 32 patients in ICU.

Instead of up to 350 000 deaths, as the government’s model predicted, Madhi expects a far more modest 25 000 deaths this year, which is roughly equal to the number of people who succumb to TB every year, a death toll which would never prompt a lockdown of any kind, let alone one that is so catastrophic for the country.

Given that South Africa’s hospitals are now standing virtually empty, the government should actually want the coronavirus to spread much faster, so they can begin treating people.

There’s no point trying to ‘flatten the curve’ with measures so severe that there isn’t a peak at all, hardly anyone gets infected, and the population cannot develop the kind of herd immunity that – in the absence of a vaccine – is the only hope for ending the outbreak.

It is, perhaps, worth remembering that a bad seasonal flu is also capable of overwhelming healthcare systems, as it did in the United States in 2017/18. Although its coronavirus deaths, currently at 56 000, are certain to exceed the toll of that season, at 61 000, that flu outbreak saw almost a million hospitalisations. It also saw hospital staff overworked, non-essential procedures cancelled, and patients treated in corridors and overflow tents. Nobody dared propose a lockdown at the time.

There is a lot still to learn about Covid-19. More research to understand how the virus spreads and how immunity develops will be critical to this effort. There are still reasons to be concerned, such as the possibility that the virus will spread much faster as colder, drier weather approaches in South Africa, or the likelihood that some Covid-19 deaths are not being recorded. However, it seems increasingly likely that the pandemic is not nearly as deadly as first believed.

The initial models informing government’s policy response were based on weak data, and speculative worst-case scenarios. Now that it is becoming clear that these scenarios will not materialise, government policy should change accordingly.

In the case of South Africa, the lockdown should be lifted as rapidly as possible, on a risk-sensitive basis. Sensible infection control precautions should remain in place, and vulnerable individuals – the elderly and those with complicating conditions – should remain isolated. However, the virus should be allowed to spread at a manageable pace through the rest of society. Our people should be allowed to return to work, so they can once again put food on the table.

The only objective should be to keep hospitals, and particularly intensive care units, near but below their capacity. That means we need more cases than we have right now.

South Africa has had six weeks since the introduction of the first social distancing measures, and three months since the WHO declared an emergency, to get its healthcare system prepared. It is time to start using it, now.

It will be hard for government officials to admit that their response was over-zealous and based on bad information, but it is essential for the future of the country that they swallow their pride and do so.