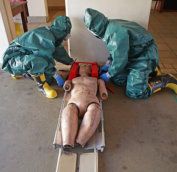 The lockdown will lead to 29 times more lives lost than the harm it seeks to prevent from Covid-19 in SA, according to a conservative estimate contained in a new model developed by local actuaries.

The model, which will be made public today for debate, was developed by a consortium calling itself Panda (Pandemic ~ Data Analysis), which includes four actuaries, an economist and a doctor, while the work was checked by lawyers and mathematicians. The process was led by two fellows at the Actuarial Society of SA, Peter Castleden and Nick Hudson.

They have sent a letter, explaining its model, to President Cyril Ramaphosa. In the letter, headed “Lockdown is a humanitarian disaster to dwarf Covid-19”, they call for an end to the lockdown, a focus on isolating the elderly and allowing children to go back to school, while ensuring the economy restarts so that lives can be saved.

“Had the prospect that coronavirus could kill tens of millions of people been increasingly confirmed, lockdowns may have been justified. That possibility no longer exists. It now seems unlikely that more than a 1-million will die worldwide. The humanitarian crisis provoked by lockdown, however, is a matter of sheer certainty,” they say.

Castleden and Hudson stress that this shouldn’t be seen as a willingness to swap the lives of the elderly for ending the lockdown. It’s an accusation, they say, which is desperately naive. “The effects of poverty in terms of death and sickness are well known — so well that they are even modelled by insurance companies when they set their premiums … hunger causes long-term illnesses, retards development and condemns children to lives of misery and dependence,” they say.

Rather, they say their model aims to use science and data to help political leaders make choices that will lead to the least harm for the country. It notes that deaths from poverty are slow, out of the public eye and easier to ignore.

Either way, it’s an important contribution to the debate about SA’s response to the virus, since the government has not publicly released models of either projected Covid-19 deaths or the economic implications of the lockdown.

Since SA’s Covid-19 data is so sparse, Castleden and Hudson used New York’s public extensive data, overlaying the percentage of people who died in each age range onto a model of SA’s population. This allowed them to establish what percentage of 40-year-olds, and what percentage of 80-year-olds, would die. For example, if a woman dies at age 40 of Covid-19 – and typically only very sick young people die – they work out she would have lived another 17.7 years but for the virus. A death of an 80-year-old equals fewer years lost.

In SA, they estimate that 5.4 years of life have been lost per Covid-19 death. They then multiply this by the range of deaths which they predict – 20,000 – as well as the actuarial society’s prediction of 88,000 fatalities. They factor in that the lockdown will have reduced some deaths, but not all. In the end, their model translated into a minimum of 26,800 “years of lives lost” due to Covid-19, and a maximum of 473,500 years. (This, critically, shouldn’t be confused with the actual number of fatalities expected from Covid-19.)

The actuaries then used the figures predicted by the National Treasury to model the impact on poverty. On Friday, the Treasury estimated that between 3-million and 7-million jobs will be lost due to the measures taken to combat the virus. The actuaries then work out that, conservatively, 10% of South Africans will become poorer, and as a result, will lose a few months of their lives.

In the end, their model showed that the number of years lost owing to the economic contraction caused by lockdown lies between 14-million and 24-million. They say they erred on the side of caution: had they used a lower estimate of Covid-19 deaths and greater estimate of job losses, the result would be a figure far higher than the 29 times calculation they reached.

“We should wear masks, we should cocoon our old and infirm, and we should be cautious in our interactions. We should not incarcerate the masses in their homes, limiting their hard-earned freedoms and decimating the economic system that furnishes their livelihoods. We should be doing everything we possibly can to allow businesses to operate,” they say.

Panda’s model highlights that based on all public European data, 90% of Covid-19 deaths were in people 70 or older with one or more comorbidity, while the relative risk to the young and healthy is negligible. The actuaries then used a second actuarial model, called the Preston curve, to check their initial calculations and ensure they match up.

Actuaries typically spend their time working out models for how long people will live, to ensure life insurance premiums can be properly calculated. If they get it wrong and people die sooner than expected, premiums will be too low, payouts will be made sooner than expected and insurance companies will go bankrupt. But actuaries also try to model what risk factors can shorten life expectancy, and the impact of wealth and health measures.