A COCKTAIL OF SECRECY AND INCOMPETENCE

President Cyril Ramaphosa and his executive technocracy, facing off against a Soviet of Fools — is that the appropriate collective noun? — has afforded himself seven weeks to deal with steadily increasing Covid-19 infection rates. He’s done so cosseted in an atmosphere of deep secrecy and anti-democratic tendencies. Whether you’re pro-lockdown or anti-lockdown—let’s be honest, there is no actual lockdown—fear and hatred are starting to take over. Ramaphosa, who is a (sort of) elected official, needs to start answering some questions.

The lockdown, in its umpteenth day, is taking on some typically South African characteristics: it’s turning into a low-grade race war. It took longer than I imagined it would, and the run-up was largely confined to snipes over roast chicken on one hand and acts of police and army brutality on the other.

But now, we can return to our regular programming: divided by race, we blah blah Twitter Facebook etc. etc.

As grim as it was ordained, South Africa’s latest racial flap — which is to say, the extension of an endless economic and cultural war that dates back several centuries — has become more prominent as the lockdown has dragged on, for the simple reason that desperation is gauged differently in different social groups. Surfing for the surfers. Food parcels for the starving. It’s tough to reconcile these two positions, but if neo-feudalism has its upsides, it’s that our social disparities contribute directly to South Africa’s only functioning 4IR sector: the generation of reasonably amusing memes: 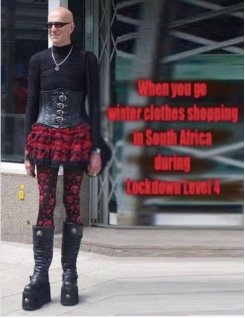 The conditions of the lockdown haven’t helped. The middle and upper classes have been incarcerated in their suburban palaces, chowing Netflix, bleeding cash. The marginalised have been, well, marginalised — the sjambok and the gun have held them rooted in place. The logic of spatial apartheid has been employed to keep the classes separate but unequal, a perfect distillation of the norm, except in extremis. South Africa’s proxemical specifics are not very complicated — for the most part, social groups live exactly the same way they did 30 years ago. Apartheid, my friends, was still thriving long before the National State of Disaster regulations launched a revivified bout of comparative analysis.

They said Covid-19 would change everything. Instead, it’s made the same shit more same-y.

Is this lockdown rational?

Not entirely, no. And so discord has set in. The wags are reading the small print, and the small print gets smaller and smaller: this wacky eye-blink in human history has been defined for the South African bourgeoisie not just by disinformation, but by information overload. It’s impossible to make sense of what is happening, largely because epidemiology is a specialised field with a limited number of expert practitioners, and they don’t include the pub gobshite, the English lit student, or the tech bro.

And the Facebook posts — my God, there are not enough C-grade universities to process the masters’ degrees that will rise from the compost of our stupidity.

If this wasn’t enough, we have now Big Debated the “argument” over whether or not to open the economy into a lowest common denominator binary proposition. Capitalists (AKA “whites”) want the economy open, because if you can’t afford to eat, eventually Covid-19 becomes a technicality. And socialists (AKA “blacks”) want the lockdown to continue ad infinitum, because this is a majority black country whose brutalised citizens should be looked after by the state, and it will largely be black people dying en masse if/when this thing finally kicks in.

Both points of view hold their truths. But they can’t exist in opposition to one another. Regardless, ‘capitalists’ have gone full blown libertarian, eschewing the state as a solution for anything. For decades, the vast majority of white folks faced apartheid with extraordinary equanimity and obedience — it was the law of the land, and nothing could be done about it. Now, memes like this one are doing the rounds: 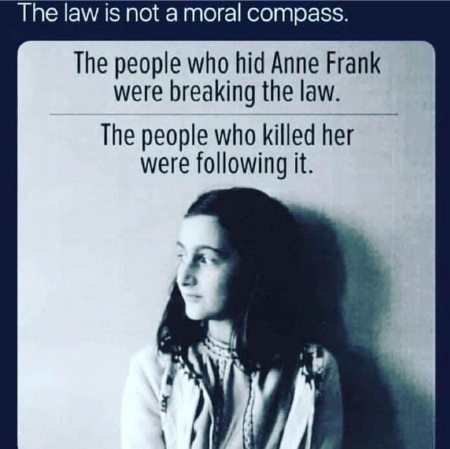 This, I’m afraid, is what moral insanity looks like.

And what about the “other side” — the Twitter shills and lefty scolds who insist the ANC-led government has done a fine job, and that we can be saved by some version of collectivism, benevolently guided from on high. Doesn’t the successful tempering of South Africa’s Covid-19 transmission rate prove that government-run collectivism is a viable alternative to free-market brutality?

Sadly, crisis-statism does not presage the onset of “real” socialism. The command and control economy that the ANC is currently cos-playing — a Stalinist fantasyland of mandated winter wear and forbidden shoelaces — is an authoritarian circle-jerk capped off by a nightly curfew. And no one should ever meekly accept a restriction on movement, unless the rationale has been deeply considered, thoroughly explained, and implemented with wide consensus. That is the baseline position from which all democracies must operate.

Any reporter who has worked a day during this lockdown will tell you that there is no lockdown. There is the Disney version of our infection rates, which look good on paper because our testing is a mockery of international best practice. And there’s the majority of South Africa’s people, who go about their day with a mask draped around their chin, sullenly loathing the restrictions that, in the end, will not keep them safe from anything.

Why has the government treated the population like a bunch of drooling fools, handing out slivers of information and great big dollops of violence?

Well, this ain’t Sweden, and they don’t trust us. Likewise, anyone who trusts the ANC at this stage of the game might as well drown themselves in a vat of pineapple mampoer. And yet, there’s been a hilarious resurgence in popularity for the likes of Nkosazana Dlamini Zuma — the same Nkosazana Dlamini Zuma who agreed to run as a front for a Gupta-Zuma kleptocracy, who was illegally escorted in a presidential VIP cortège as she campaigned, and who, before that, served as one of most disinterested and commensurately loathed heads of the African Union in its history. (This doesn’t even touch on the blights on her record prior to 2012.)

As Minister for Co-operative Governance and Traditional Affairs, she effectively spearheads the National State of Disaster regulations. And Dlamini Zuma is not your friend. Neither is Lindiwe Sisulu, a woman whose authoritarian revanchism is obvious from her governing record. It was during her stint as Housing Minister that the KZN Land Acts were legislated: a set of property laws that made the equivalent apartheid legislation seem like a day at the spa. Meanwhile, if Ebrahim Patel opened a spaza shop on Monday, it would be out of business later that afternoon. Finance Minister Tito Mboweni stingily moves money around in the world’s most undazzling shell game, and while he is facing the mother of all uphill battles, he needs to come to terms with the fact that old-school austerity bookmaking will not get us through this mess.

Then comes Ramaphosa and his technocratic backline, all of whom are so in love with their own brilliance that they fail to grasp the vastness of their limitations. They’ve doubled down on the lockdown as a working model of the developmental state, imagining that the light at the end of the tunnel is something other than an oncoming train. And that it instead represents a permanently low infection rate that will bolster their fees on the international speaking circuit.

The scale of the issues facing government right now have no historical corollary, and most South Africans understand this. Perhaps that’s why, in his increasingly rare national addresses, Ramaphosa has shown a remarkable ability to tame even the most rabid of Zille-ites (a track record that ended on Wednesday night). Still, I find the general love for the president surprising, considering that he has governed by fiat, employing a National Coronavirus Command Council – a sort of watered-down but still unaccountable war council – to drive state-of-disaster policymaking that has dispensed with anything resembling transparency.

Covid-19 is a virus, not a massive Wakandan army thundering toward Pretoria on vibranium-powered rhinos. Despite the terminology employed across the world to turn us into unthinking replicants who do as we’re told, we are not at war.

So why the caginess?

When was the last time the president of this country held an actual press conference? When did he last answer a simple bloody question? When did he face us down and defend his position without sending his proxies to do the dirty work? Again, Ramaphosa has had ample opportunity to show us who he is, and from his years in business, his re-entering politics only to become a key figure in the Marikana massacre, his tacit acceptance of Zuma’s kleptocracy, and his newfound avuncular authoritarianism. (It’s time Cyril’s critics stood up and started yelling.)

And with good reason.

Because here’s the thing: there are nearly a million people in Gauteng alone currently at risk of starvation. Foreign nationals can’t access shelters or the unemployment insurance fund because they’re not citizens, so a whole knock-on starvation chain is kicking off across southern Africa. Remittances to rural areas have dried up. Meanwhile, the R350 top-up grant is an insult — no one can live on that. Mboweni’s R500-billion “stimulus” is just a chimera, and high-end philanthropy like the Solidarity Fund cannot replace comprehensive policy and governance. And the working poor are just cannon fodder for an ‘open economy’, where the profits accrue to Shoprite or Woolworths executives, who are more likely to get carpal tunnel syndrome in their mansions than Covid-19 behind a cash register.

Comparative analysis with other countries only gets us so far. Boris Johnson is a complete idiot. Cyril Ramaphosa is very smart. The virus doesn’t care, and will do its work regardless of how intelligent our leaders may be. There are no good guys, there are only oh-wow-they-didn’t-kill-us-all guys. Right now Cyril Ramaphosa’s gang falls into the latter category. The convenient racial tiffs will allow the ANC’s reactionaries to get them through this part of the crisis, but Karen memes will only provide so much cover when the Covid properly hits the fan.

And when the real hunger starts — and we’re well on our way — the whole system of subsistence grants in exchange for obedience will start to unravel. The seven weeks that Ramaphosa has very successfully purchased to prepare us for the coming plague have now come to an end, and another phase must begin: at all costs, we need to take care of the people on the edge, regardless of what Moody’s might say, while acknowledging that no lockdown is possible in the country’s densest, poorest regions. This fiction must end, and along with it the deep secrecy that is Cyril Ramaphosa’s default.

As the academic Shoshana Zuboff has noted, even in massively stratified and complex societies, we all get the deal: our inequalities are not sustainable, and the coming race/class war will not be stalled by Covid-19. Following the fake lockdown, it’s time to start feeding people until the virus is done with its awful, inevitable work.