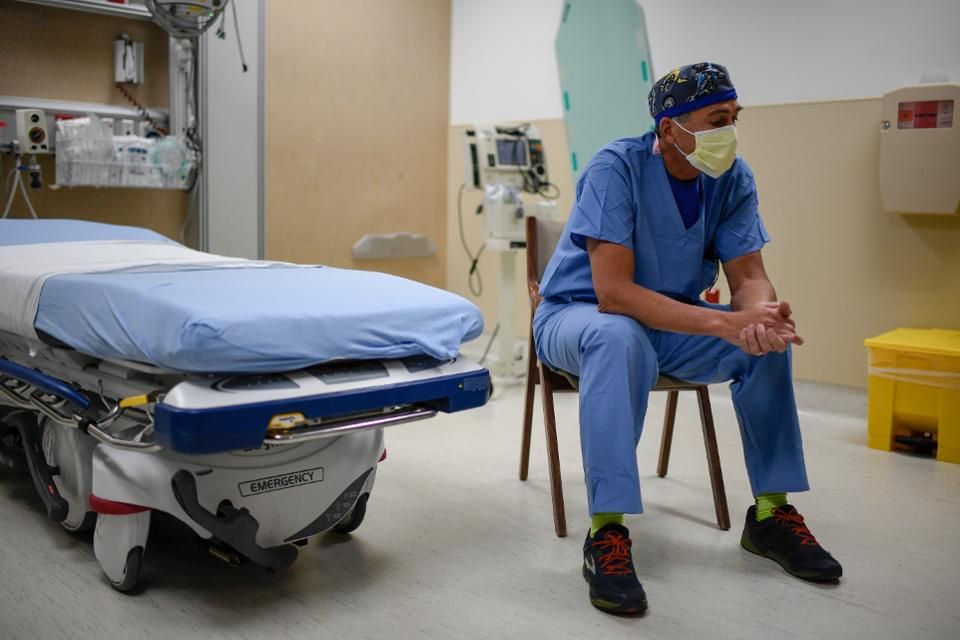 More than 600 of the nation’s physicians sent a letter to President Trump this week calling the coronavirus shutdowns a “mass casualty incident” with “exponentially growing negative health consequences” to millions of non COVID patients.

“The downstream health effects…are being massively under-estimated and under-reported. This is an order of magnitude error,” according to the letter initiated by Simone Gold, M.D., an emergency medicine specialist in Los Angeles.

“Suicide hotline phone calls have increased 600%,” the letter said. Other silent casualties:  “150,000 Americans per month who would have had new cancer detected through routine screening.”

From missed cancer diagnoses to untreated heart attacks and strokes to increased risks of suicides, “We are alarmed at what appears to be a lack of consideration for the future health of our patients.”

Patients fearful of visiting hospitals and doctors’ offices are dying because COVID-phobia is keeping them from seeking care. One patient died at home of a heart attack rather than go to an emergency room. The number of severe heart attacks being treated in nine U.S hospitals surveyed dropped by nearly 40% since March. Cardiologists are worried “a second wave of deaths” indirectly caused by the virus is likely.

The physicians’ letter focuses on the impact on Americans’ physical and mental health.  “The millions of casualties of a continued shutdown will be hiding in plain sight, but they will be called alcoholism, homelessness, suicide, heart attack, stroke, or kidney failure. In youths it will be called financial instability, unemployment, despair, drug addiction, unplanned pregnancies, poverty, and abuse.

“It is impossible to overstate the short, medium, and long-term harm to people’s health with a continued shutdown,” the letter says. “Losing a job is one of life’s most stressful events, and the effect on a person’s health is not lessened because it also has happened to 30 million [now 38 million] other people.  Keeping schools and universities closed is incalculably detrimental for children, teenagers, and young adults for decades to come.”

While all 50 states are relaxing lockdowns to some extent, some local officials are threatening to keep stay-at-home orders in place until August.  Many schools and universities say they may remain closed for the remainder of 2020.

“Ending the lockdowns are not about Wall Street or disregard for people’s lives; it about saving lives,” said Dr. Marilyn Singleton, a California anesthesiologist and one of the signers of the letter. “We cannot let this disease change the U.S. from a free, energetic society to a society of broken souls dependent on government handouts.” She blogs about the huge damage the virus reaction is doing to the fabric of society.

Dr. Jane Orient, executive director of the Association of American Physicians and Surgeons, also warns that restrictions are having a huge negative impact on non-COVID patients.

“Even patients who do get admitted to hospital, say for a heart problem, are prisoners. No one can be with them. Visitation at a rare single-story hospital was through closed outside window, talking via telephone,” she wrote us.  “To get permission to go to the window you have to make an appointment (only one group of two per day!), put on a mask, get your temperature taken, and get a visitor’s badge of the proper color of the day.”

How many cases of COVID-19 are prevented by these practices? “Zero,” Dr. Orient says.  But the “ loss of patient morale, loss of oversight of care, especially at night are incalculable.”

Virtually all hospitals halted “elective” procedures to make beds available for what was expected to be a flood of COVID-19 patients.  Beds stayed empty, causing harm to patients and resulting in enormous financial distress to hospitals, especially those with limited reserves.

Even states like New York that have had tough lockdowns are starting to allow elective hospital procedures in some regions.  But it’s more like turning up a dimmer switch. In Pennsylvania, the chair of the Geisinger Heart Institute, Dr. Alfred Casale, said the opening will be slow while the facility is reconfigured for COVID-19 social distancing and enhanced hygiene.

Will patients come back?  COVID-phobia is deathly real.

Patients still are fearful about going to hospitals for heart attacks and even for broken bones and deep lacerations. Despite heroic efforts by physicians to deeply sanitize their offices, millions have cancelled appointments and are missing infusion therapies and even chemotherapy treatments. This deferred care is expected to lead to patients who are sicker when they do come in for care and more deaths from patients not receiving care for stroke, heart attacks, etc.

NPR reported about a Washington state resident who had what she described as the “worst headache of her life.”

She waited almost a week before going to the hospital where doctors discovered she had a brain bleed that had gone untreated.  She had multiple strokes and died. “This is something that most of the time we’re able to prevent,” said her neurosurgeon, Dr. Abhineet Chowdhary, director of the Overlake Neuroscience Institute in Bellevue, Wash.

As the number of deaths from the virus begin to decline, we are likely to awaken to this new wave of casualties the 600 physicians are warning about. We should be listening to the doctors, and heed their advice immediately.

UPDATE‪: An Associated Press article by Michael Biesecker and Jason Dearen that includes a description of the 600-physician letter is headlined “GOP fronts ‘pro-Trump’ doctors to prescribe rapid reopening,” which has led to criticism of Gold and her colleagues on social media. However, as the article acknowledges in the text, “Gold denied she was coordinating her efforts with Trump’s reelection campaign.” Gold echoed those comments to us, saying, “This was 100% physician grassroots. There was 0% GOP.”