“So the real scandal is: Why did anyone ever listen to this guy?” 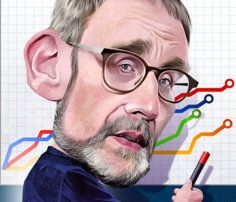 Certainly one of the most celebrated academic flops in history. Still not a sound about his failure from the South African government. Maybe because his model is still worshipped here?

[Imperial College epidemiologist Neil] Ferguson was behind the disputed research that sparked the mass culling of eleven million sheep and cattle during the 2001 outbreak of foot-and-mouth disease. He also predicted that up to 150,000 people could die. There were fewer than 200 deaths. . . .

In 2009, a government estimate, based on Ferguson’s advice, said a “reasonable worst-case scenario” was that the swine flu would lead to 65,000 British deaths. In the end, swine flu killed 457 people in the U.K.

Last March, Ferguson admitted that his Imperial College model of the COVID-19 disease was based on undocumented, 13-year-old computer code that was intended to be used for a feared influenza pandemic, rather than a coronavirus. Ferguson declined to release his original code so other scientists could check his results. He only released a heavily revised set of code last week, after a six-week delay.

So the real scandal is: Why did anyone ever listen to this guy?

I don’t know. It’s a good question. When Ferguson was in the news a few months ago, why wasn’t there more discussion of his atrocious track record? Or was his track record not so bad? A google search turned up this op-ed by Bob Ward referring to Ferguson’s conclusions as “evidence that Britain’s political-media complex finds too difficult to accept.” Regarding the foot-and-mouth-disease thing, Ward writes, “Ferguson received an OBE in recognition for his important role in the crisis, or that he was afterwards elected a fellow of the prestigious Academy of Medical Sciences.” Those sorts of awards don’t cut much ice with me—they remind me too much of the U.S. National Academy of Sciences—but maybe there’s more of the story I haven’t heard.

I guess I’d have to see the exact quotes that are being referred to in the paragraphs excerpted above. For example, what did Ferguson exactly say when he “predicted that up to 150,000 people could die” of foot-and-mouth disease. Did he say, “I expect it will be under 200 deaths if we cull the herds, but otherwise it could be up to 2000 or more, and worst case it could even be as high as 150,000?” Or did he flat out say, “150,000, baby! Buy your gravestone now while supplies last.”? I wanna see the quotes.

But, if Ferguson really did have a series of previous errors, then, yeah, Why did anyone ever listen to this guy?

In the above-linked article, Fund seems to be asking the question rhetorically.

But it’s a good question, so let’s try to answer it. Here are a few possibilities:

1. Ferguson didn’t really make all those errors; if you look at his actual statements, he was sane and reasonable.

Could be. I can’t evaluate this one based on the information available to me right now, so let’s move on.

[Indeed, there seems to be some truth to this explanation; see P.S. below.]

2. Nobody realized Ferguson had made all those errors. That’s true of me—I’d never heard of the guy before all this coronavirus news.

We may be coming to a real explanation here. If a researcher has success, you can find evidence of it—you’ll see lots of citations, a prestigious position, etc. But if a researcher makes mistakes, it’s more of a secret. Google the name and you’ll find some criticism, but it’s hard to know what to make of it. Online criticism doesn’t seem like hard evidence. Even published papers criticizing published work typically don’t have the impact of the original publications.

3. Ferguson played a role in the system. He told people what they wanted to hear—or, at least, what some people wanted to hear. Maybe he played the role of professional doomsayer.

There must be something to this. You might say: Sure, but if they wanted a doomsayer, why not find someone who hadn’t made all those bad predictions? But that misses the point. If someone’s job is to play a role, to speak from the script no matter what the data say, then doing bad work is a kind of positive qualification, in that it demonstrates one’s willingness to play that role.

But this only takes us part of the way there. OK, so Ferguson played a role. But why would the government want him to play that role. If you buy the argument of Fund (the author of the above-quoted article), the shutdowns were a mistake, destructive economically and unnecessary from the standpoint of public health. For the government to follow such advice—presumably, someone must have been convinced of Ferguson’s argument from a policy perspective. So that brings us back to points 1 and 2 above.

4. A reputational incumbency effect. Once someone is considered an expert, they stay an expert, absent unusual circumstances. Consider Dr. Oz, who’s an expert because people consider him an expert.

5. Low standards. We’ve talked about this before. Lots of tenured and accoladed professors at top universities do bad work. I’m not just talking about scandals such as pizzagate or that ESP paper or epic embarrassments such as himmicanes; I’m talking more about everyday mediocrity: bestselling books or papers in top journals that are constructed out of weak evidence. See for example here, here, and here.

The point is, what it takes to be a celebrated academic is to have some successes. You’re defined by the best thing you did, not the worst.

And maybe that’s a good thing. After all, lots of people can do bad work: doing bad work doesn’t make you special. I proved a false theorem once! But doing good work, that’s something. Now, some of these celebrity academics have never done any wonderful work, at least as far as I can tell. But they’re benefiting from the general principle.

On the other hand, if the goal is policy advice, maybe it’s better to judge people by their worst. I’m not sure.

Not that we’re any better here in the U.S., where these academics have had influence in government.

Taking the long view, organizations continue to get staffed with knaves and fools. Eternal vigilance etc. Screaming at people in the press isn’t a full solution, but it’s a start.