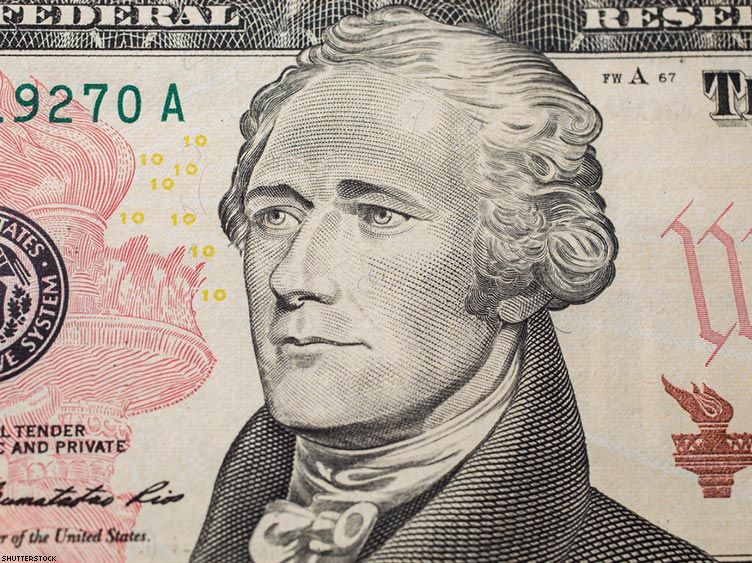 Queer people and their allies have always been part of the tapesty of the United States. Here are those who made the first few stitches.

While acceptance of LGBT people may feel like it only hit its stride in recent years (and may still be set back), homosexuality has always been a part of America. Indeed, many of this nation’s Founding Fathers partook in the company of other men, and even some of the straight leaders of the day showed a level of tolerance that ought to make Mike Pence think twice. Here’s a look at some of the nation’s architects from the colonial days to the Civil War who prove LGBT individuals always had a place in the American tapestry. 1. Alexander Hamilton
While the romance didn’t make it into the Broadway show, Alexander Hamilton maintained a relationship for years with fellow revolutionary John Laurens. In letters to Laurens, Hamilton made clear his love. “’Till you bade us Adieu, I hardly knew the value you had taught my heart to set upon you,” Hamilton wrote. The relationship between the men continued until Laurens died in battle in 1782. Hamilton, of course, also held genuine love for his wife, Elizabeth Schuyler, and once had to publicly apologize for an affair with Mary Reynolds, but plenty of documentation about the relationship with Laurens indicates America’s first Treasury secretary was bisexual. A Prussian military officer subjected to rumors about his sexuality, Baron Friedrich von Steuben was recruited by Ben Franklin to join the Americans’ cause. Credited with bringing modern warfare and rigid discipline to the revolution, historian Harry Schenawolf and others say Von Steuben helped turn the war around. 4. Charles Adams
Son of President John Adams, Charles Adams in his youth became a protégé of Friedrich von Steuben and would grow comfortable in his own homosexuality. He lived many years with John Mulligan, but he fell out of favor with his father, the president. 5. Pierre Charles L’Enfant
Part of George Washington’s inner circle, the Frenchman Pierre Charles L’Enfant would become the architect of the nation’s capital in the 1790s, as documented in The Making of Urban America. But historian Bob Arne says the planner fell out of favor for his insubordinate behavior, while also raising eyebrows among political leaders by “transgressing sexual boundaries.” 6. John Laurens
It should be no surprise that one of the earliest American leaders fighting against the practice of slavery also knew the challenges of being ostracized. Laurens found success as a military aide to Gen. George Washington. He perhaps was best known himself for recruiting slaves to become soldiers in the Continental Army, where they could literally fight to gain their freedom. His personal correspondence with Alexander Hamilton reveals to historians that the two men were likely lovers, with the two remaining close until Laurens died in battle. 7. Gilbert du Motier, Marquis de Lafayette
The friendship between George Washington and Gilbert du Motier, the Marquis de Lafayette, has been celebrated in history. Some of their correspondence indicates that Lafayette desired more from the friendship, including a letter in 1799 in which he says he feels ignored by Washington. “Complaints ought to be permitted to my affectionate heart,” he wrote. 8. Betsy Ross
OK, this one may stretch credulity, depending on one’s belief in the supernatural. But according to medium Susan Lander, a Philadelphia native who visited Betsy Ross’s home often as a child, the maker of the first American flag might be flying a rainbow one today. Lander told Out in 2014 that Ross came out to her in a psychic conversation. “I am gay and I fly the flag of pride and liberty for all of us,” Ross said, according to Lander, who says Ross revealed she was part of an underground gay and lesbian community in the late 18th century. 9. Ben Franklin
The charismatic Founding Father may not have been gay himself but showed tremendous empathy for homosexuals of the time. While serving as ambassador to France, it was Franklin who recruited strategist Baron Friedrich von Steuben to provide his expertise to the rebellion, despite knowing the soldier’s homosexuality. Letters reported in the Washington Blade reveal that part of Franklin’s motivation was the knowledge Von Steuben could face prosecution for sodomy in Europe, so a station in America served as sanctuary. Of course, AIDS activist and writer Larry Kramer lists Franklin among the American historical figures he believes were gay, so maybe Franklin was more than an ally. 10. The Jamestown Settlers
Richard Godbeer, author of The Sexual Revolution in Early America, notes that Jamestown was originally established as an all-male settlement, and he expresses skepticism that the colony was celibate. He notes that many of the men paired off to form households in the 17th-century Chesapeake area and says it seams reasonable to assume many of those folks were coupling sexually as well. 11. William Rufus Devane King
The first U.S. senator from Alabama, William Rufus Devane King is considered by many to have been the nation’s first gay vice president, according to the Washington Blade. (No one tell Jeff Sessions.) He and James Buchanan shared a home while the men served together in the Senate, and Texas Christian University professor Paul F. Boller Jr. says Washington insiders in their day gossiped that the distinguished gentlemen were more than roommates. King eventually died 25 days after being sworn in as Frankin Pierce’s vice president. 12. Thomas Morton
Well before the American Revolution, Plymouth Colony nontraditionalist Thomas Morton committed a different sort of revolutionary act, according to Michael Bronski’s A Queer History of the United States. Morton broke off from the colony and founded Merrimount, a community that broke cultural taboos of the time and celebrated same-sex desires and interracial marriages well before the Puritan values of the era would evolve. 13. James Buchanan
The only bachelor to ever be elected president of the United States, James Buchanan by multiple accounts engaged in gay relationships and may be remembered in history as the first gay president. Senator William Rufus King alleged he had an affair with Buchanan, according to Larry Flynt’s well-researched (if hedonistically focused) One Nation Under Sex. King and Buchanan even lived together while both were in the Senate. Indeed, scholars note that in one letter Buchanan wrote after King left to become an envoy to France of his sadness at the departure and that he would need to go “wooing to several gentlemen” in unsuccessful search of similar affection. 14. Abraham Lincoln
An inspiration to the Log Cabin Republicans even today, Abraham Lincoln’s sexuality has been questioned publicly for a century and a half. Most notably, Lincoln appeared to have a long-running relationship with Joshua Speed. Historian C.A. Tripp delves into this and other relationships, including suggestions that Lincoln regularly shared a bed with a bodyguard, in The Intimate World of Abraham Lincoln. 15. Charity Bryant and Sylvia Drake
Maybe they weren’t military revolutionaries, but these daughters of the American Revolution may be remembered as one of the United States’s first same-sex uniona. The two women moved in together in 1807 and stayed a couple for 44 years, according to Rachel Hope Clever’s book Charity and Sylvia: A Same-Sex Marriage in Early America.