Da Brat Stayed Closeted Because of How Ellen Was Treated 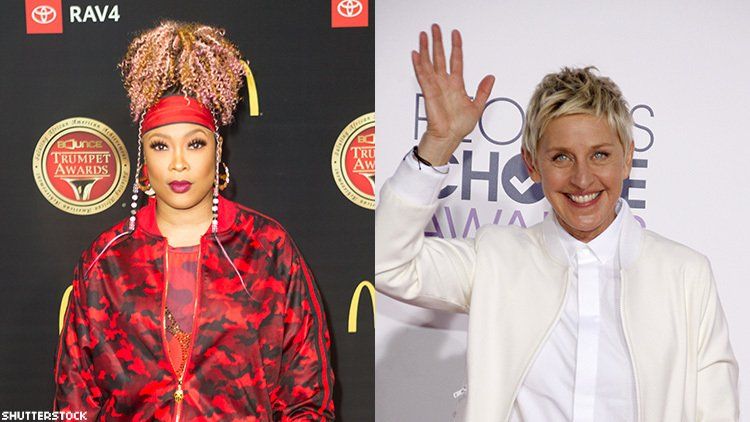 After years of media speculation, Grammy-nominated rapper and Dish Nation host Da Brat finally confirmed her sexuality—and that she was in a relationship with girlfriend and Kaleidoscope Hair Products CEO Jesseca Dupart—back in March.

While their relationship has been a joy to follow along with on social media since, there were definitely times in Da Brat’s long-spanning career where her queerness wasn’t always an open topic. In a recent interview with Variety, the hip-hop legend recalls hiding who she was from the public eye — especially considering how society and the media treated another notable queer celebrity.

“I was always told you want to be f—able to men and women to sell records — you don’t want anybody to discriminate,” Da Brat told the trade mag about not coming out sooner in her career for fear of her image and backlash. “It was absolutely my decision. I mean, you saw what happened to people like Ellen: Remember when she lost her TV show, and all these horrible things were happening? People were totally against it.”

Back in 1997, comedian and lesbian icon Ellen DeGeneres came out in real life on the cover of TIME Magazine concurrently with her sitcom character Ellen Morgan on the ABC series Ellen. Because of the attitudes of the time, Ellen was essentially blacklisted in Hollywood for years before her mega-popular daytime talk show took off in 2003. It was these attitudes and the homophobic, unfair treatment that Ellen endured that Da Brat was trying to avoid by staying in the closet during the ’90s and ’00s, but fast-forward to 2020, and the Atlanta-based artist and media personality is ready to celebrate her first Pride Month being out — and hopefully, inspire young queer people along the way.

“To me, Pride is loving myself and not making excuses for anything: Live in your truth,” she told Variety. “If I can inspire someone or help somebody to deal with their issues and their sexuality, then I’m here for it. It feels like a weight has been lifted.”

Da Brat currently co-hosts Atlanta’s Rickey Smiley Morning Show, executive produces We TV’s Growing Up Hip-Hop Atlanta reality series, and is scheduled to play lesbian character Cleo in a touring stage production of 1996’s Set It Off (a role that was originally played by Queen Latifah).