Sir Elton John, gay icon, musician and philanthropist touched millions of lives and will be eternalised a 1 pound gold coin. 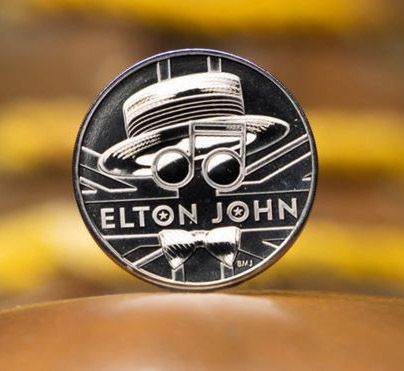 The Royal Mint has just granted him their ultimate honour have his image on a 1 pound coin. Gold coin collectors take note! It will be worth far more than 68 000 pounds.

He said it was a “fabulous honour” and a “truly humbling milestone”.

The Royal Mint at Llantrisant in south Wales is to sell coins featuring Sir Elton’s glasses and straw boater hat to mark his career of more than 50 years.

Artist Bradley Morgan Johnson from Norwich used a musical note design to create round spectacles topped with hat and bow-tie on a Union flag background.

“It really is a fabulous honour to be recognised in this way,” said Sir Elton.

“The last few years have contained some of the most memorable moments of my career, and this is another truly humbling milestone on my journey.”

A one-off coin will be auctioned to raise cash for the Elton John Charitable Trust.

There are a number of other editions in gold, silver and in non-precious metal.

“Elton John is without a doubt a British music legend and is recognised as one of the most successful singer-songwriters of his generation,” the Royal Mint’s Clare Maclennan said.

“We are delighted to honour Elton’s significant contribution to British music on a UK coin.”

In 2019 the 73-year-old star published his autobiography, and saw the release of the film biopic Rocketman, in which he was portrayed by Aberystwyth actor Taron Egerton.

Sir Elton has embarked on a final world tour – Farewell Yellow Brick Road – although it has been interrupted by the coronavirus pandemic.

The rock band Queen were the first act to be celebrated in the Royal Mint’s series of music legends with a coin issued in January.