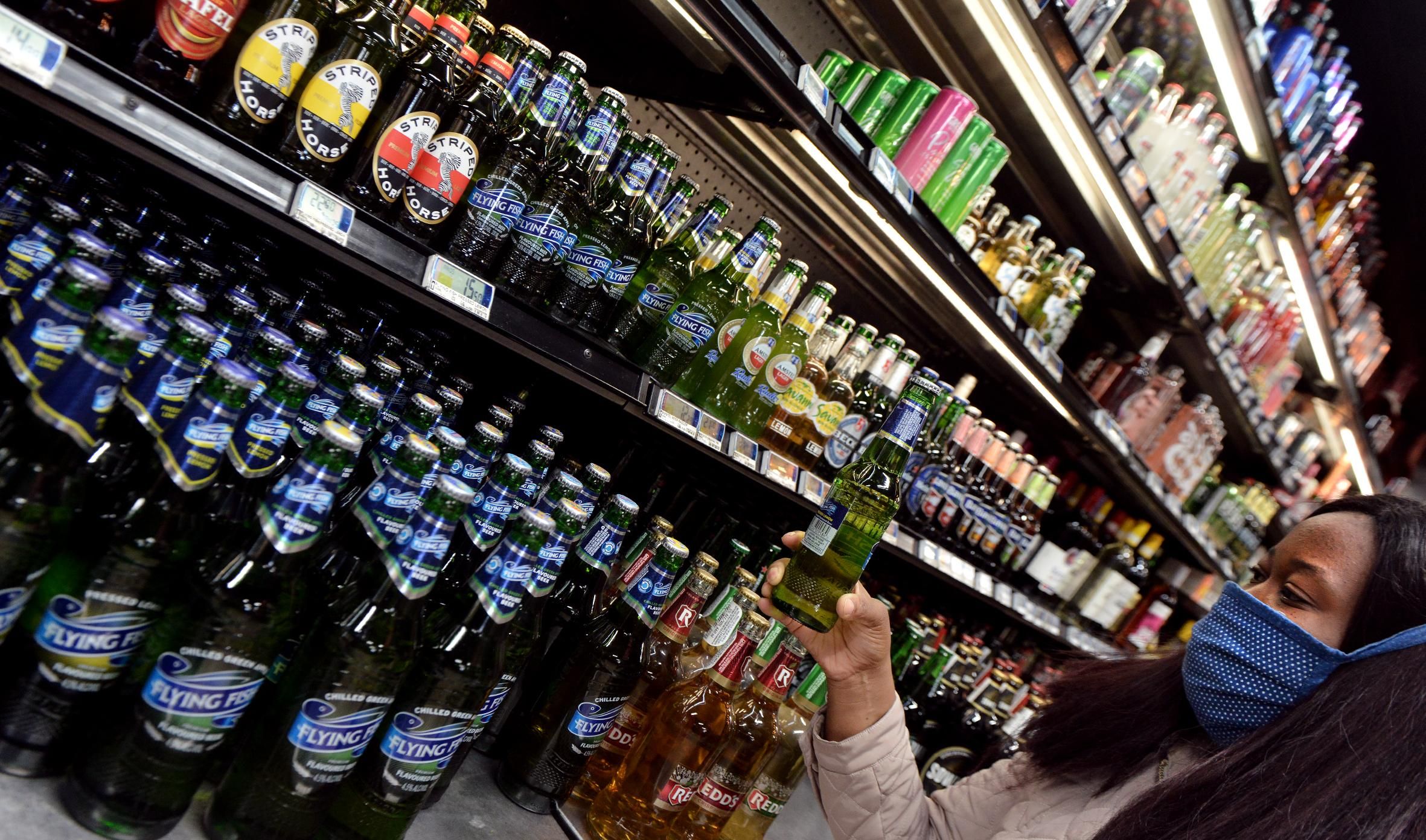 With a wave of his presidential hand, the command was given: alcohol sales will once again be banned, with immediate effect. Minutes later, the new regulations were gazetted and came into force. South Africans now live in a dictatorship.

‘Dictatorship is a form of government in which one person or a small group possesses absolute power without effective constitutional limitations,’ says the Encyclopædia Britannica. ‘The term dictatorship comes from the Latin title dictator, which in the Roman Republic designated a temporary magistrate who was granted extraordinary powers in order to deal with state crises.’

When Ramaphosa on Sunday night deigned to appear before the people to inform them of the latest edicts issuing from the NCCC, he said ‘our nation is confronted by the gravest crisis in the history of our democracy’.

He’s right, but that crisis is not the coronavirus pandemic. It is the rise of authoritarianism, under which government rules by diktat, takes great credit for its meagre successes, and blames its failures on the disobedience of citizens.

At first, it sounded like the government was wising up. Ramaphosa noted that returning to Lockdown Level 4 or 5 as the peak of coronavirus infections approached had been considered, but ‘would not necessarily achieve a significant reduction in the rate of transmission and would come at an extraordinary economic cost, putting more livelihoods at risk and potentially causing long-lasting social harm’.

That has always been true, as we have pointed out many times in these pages.

Sting in the tail

Before anyone could heave a sigh of relief, however, he added the sting in the tail: a night-time curfew would be reimposed, and alcohol would once again be banned, ‘with immediate effect’.

The Democratic Alliance’s shadow minister of communications, Phumzile van Damme, promptly tweeted an objection: ‘[There] is no “immediate effect”, unless there are regulations that make it “immediate effect.” The President does not rule by diktat. This is a democracy guided by the rule of law. Until the regulations are published, there is no ban. This matters.’

Unfortunately, NCCC chairperson Dlamini-Zuma published the gazetted regulations mere minutes after the president spoke. And that was that. The people were commanded. Their duty now is merely to obey.

Gone are the days of public consultation, giving reasonable notice, or any such niceties. The president – despite his promise to engage more with the media – isn’t even open for questions after his dictatorial pronouncements.

The order to once again prohibit the sale of alcohol dumped the industry, with its associated suppliers of transport, glassware, labels, cans, cardboard boxes, plastic wrap, corks and bottle caps, back into a deep crisis.

Again, tens of thousands of employees will have to be paid even though their employers do not generate revenue. Liquor store operators, many of whom are independent or franchise owners, will have to service rent, loans and mortgage payments, despite there being no income with which to do so. Orders were placed for stock anticipated to be sold this week, but they will instead gather dust in retail shops that are hardly secure storage facilities, and are vulnerable to being looted.

With the pandemic peak expected between the end of July and late September, this ban could last even longer than the first one.

A liquor store owner of my acquaintance messaged: ‘Anyone know if Spar parking or Pick n Pay is better for begging? Alternatively I’ll just have to start eating my shoes.’

Within minutes of claiming to care about ‘putting more livelihoods at risk’, Ramaphosa revealed his insincerity.

The ostensible justification for the renewed alcohol ban is to reduce incidents of alcohol-related violence, which can lead to trauma cases at hospitals. However, it is far from clear that this is more than a marginal problem.

Although trauma cases undoubtedly do place some pressure on hospitals, we know that the government has been lying through its teeth about the numbers. The politburo’s jackboot-in-chief, police minister Bheki Cele, has been improvising the statistics like a drunk jazz player.

On 11 June, during a public lecture that was streamed live on Facebook, Cele said that 600 000 people die every year due to alcohol, and that 34 000 hospital beds were occupied due to alcohol-related incidents since the first prohibition was lifted on 1 June.

Fact-checkers were quick to pounce. At News24, Alex Mitchley shredded Cele’s numbers by consulting their source. He concluded that the 34 000 probably referred to the 34 615 total trauma cases before the lockdown. Only 40% of those were thought to be alcohol-related.

Of the fewer than 14 000 alcohol-related cases, many, and perhaps most, were treated in emergency rooms, and did not result in actual hospital admissions or bed occupancy. Therefore, the claim that 34 000 beds were occupied as a consequence of alcohol is, quite simply, false.

Mitchley also found that instead of 600 000 alcohol-related deaths per year, as Cele claimed, the true number is closer to 60 000. Cele exaggerated by an order of magnitude, just to support his personal view that ‘nothing good comes from alcohol’.

It also noted that blood alcohol content is not a routine test done in emergency rooms, since it requires the patient’s consent, and tests are expensive, so factual data on how many trauma cases really are alcohol-related do not exist.

Still, 11 750 sounds like quite a lot. However, there are over 5 000 healthcare facilities in South Africa, so that works out to 2.35 patients per facility per week. If we assume all trauma cases go directly to hospitals, instead of to clinics, South Africa’s 610 hospitals need to cope with 19.26 cases per week on average, or 2.75 cases per day. If we further assume that all alcohol-related trauma cases present only to one of the country’s 407 government hospitals, we’re dealing with 28.87 cases per week, or 4.12 cases per day.

Frankly, if our hospitals can get overwhelmed by just a handful of trauma cases per day, many of which do not require admission, we have far bigger problems than alcohol.

It is true that the number of trauma cases presenting at hospitals decreased during the Level 5 and Level 4 lockdown periods, but it is unclear how much of this decrease can be attributed to the ban on alcohol.

With the cowed citizenry under military curfew, and confined by law to their houses except to shop for essentials or seek medical care, there were few opportunities to suffer traumatic injuries, sober or otherwise.

A record of bad decisions

The NCCC has a terrible record when it comes to consistent, rational, science-based decisions.

On the tobacco ban, with which the NCCC has stubbornly persisted, the science is in, and it proves the government wrong. A massive peer-reviewed study in the UK of factors associated with Covid-19 death in 17 million patients found ‘current smoking was associated with a lower risk, concurring with lower than expected smoking prevalences in previous studies among hospitalised patients in China’.

Reminiscent of the U-turn about lifting the tobacco ban, the Presidency on Friday evening announced on social media that hotels, lodges and guest houses would be allowed to accommodate leisure travellers. The post was soon deleted, however, and replaced with one that did not reopen leisure tourism.

Yet on Sunday night, the president said that minibus taxis would be permitted to load to 100% of their capacity. Religious gatherings, which are known super-spreaders, also remain legal.

It seems trivial to maintain sanitary conditions in the domestic tourism industry, while it is difficult to do so on mass public transit. Why relatively high-risk industries are permitted, while a relatively low-risk industry is not, is a mystery. Lockdown hit the tourism industry the hardest, so this again gives the lie to the president’s stated concern about the ‘extraordinary economic costs’ and ‘livelihoods at risk’ due to lockdown regulations. He couldn’t care less.

Gauteng Health MEC Dr Bandile Masuku took to television to claim that the province was preparing 1.5 million graves in anticipation of the Covid-19 pandemic peak. eNCA uncritically reported this news.

At the time, the global Covid-19 death toll stood at just over 500 000. How a region with 0.002% of the world’s population would account for triple the global sum of Covid-19 deaths was left as an exercise for the viewer. The Gauteng Health Department later explained that this referred to total graveyard capacity, but still, it would take almost 10% of Gauteng’s total population to fill those graves.

Evidently, the government’s strategy for kick-starting the economy and creating jobs is literally to put people to work digging holes and filling them up again.

The lucrative, ludicrous tenders don’t end with grave-digging. Health minister Zweli Mkhize proudly unveiled the Scooter Project in the Eastern Cape on 12 June. These rickshaw-like scooters could, it was said, transport patients to hospital from rural areas, and deliver medicine. Less than a month later, he was forced to admit that these scooters, 100 of which were procured at a cost of R10 million, were not fit for purpose.

President Ramaphosa again said that ‘South Africa may have between 40 000 and 50 000 deaths before the end of this year’. He added, ‘We must make it our single most important task to prove these projections wrong.’

Why, though? The projections have already been proven wrong. Reality has stubbornly refused to conform to the alarmist model predictions, and experts have cast grave doubts upon the reliability of the models, the accountability of those responsible for preparing them, and the benefits of the lockdown regulations. It seems likely that the president’s projections are overstated by a factor of four or more.

The NCCC rules by diktat, without any accountability or oversight, destroying the livelihoods of thousands of people at the stroke of a pen. Its decisions are not based on reason or science, but on intuitive hunches, scaremongering, personal agendas, and special interests.

The renewed booze ban is merely the latest in a long string of poor decisions. It reveals that the NCCC is ignorant of both the costs and benefits of the capricious rules it foists upon hapless citizens, and it couldn’t care less about the lives and livelihoods they destroy.

Either way, the NCCC is not fit to rule.