In Yes, God, Yes, a Lesbian Helps a Straight Girl Lose the Shame 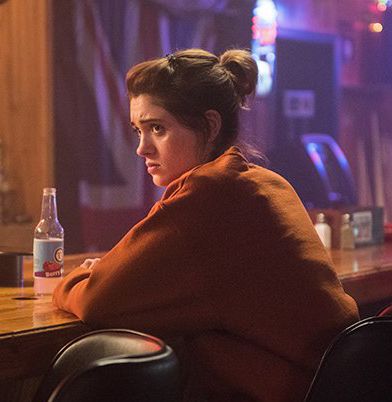 A Catholic high school girl grapples with guilt over self-pleasure until she meets a wise older lesbian.

In the delightful comedy Yes, God, Yes, a Catholic high school girl struggles with guilt, plus the fear of hell, over her sexual desires, including the desire for solo sex — forbidden by her religion. She tries to pray the urge away (and get in with her school’s cool kids) by attending a four-day religious retreat. She discovers a lot of hypocrisy there but finds relief from her guilt and fears with the help of a lesbian in a nearby bar.

Yes, God, Yes, starring Natalia Dyer (Stranger Things) as protagonist Alice, premiered last year at South by Southwest, where it won a Special Jury Award for its ensemble cast. It also won the Audience Award for Best Narrative Feature at the 2019 Santa Fe Independent Film Festival. With the pandemic putting the kibosh on theatrical screenings, the film is going to be shown in virtual cinemas and drive-ins beginning July 24 and via video on demand starting July 28.

Yes, God, Yes is written and directed by the talented Karen Maine, the co-writer of 2014’s Obvious Child, about a young woman dealing with both an unwanted pregnancy and a new romance. Like Obvious Child, Yes, God, Yes grew out of a short film and tells a story of female empowerment.

“Because of my upbringing, I’ve always been drawn to realistically portraying topics of interest to women that are still considered taboo in our male-dominated world,” Maine says in her director’s statement. “Abortion (with Obvious Child), and now female sexual pleasure with Yes, God, Yes. Male pleasure is discussed in reproductive curriculum because it’s an essential part of conception, whereas female pleasure is usually left out. As a result, young women often feel like their genitals are off limits even to themselves. The simple act of exploring their own bodies is seen as shameful. This is certainly how I felt growing up, and it was particularly pronounced for me because Catholicism teaches that self-pleasure is sinful. So when I discovered masturbation at age 14, I thought I had done something truly unforgivable. An intense guilt hung over me for days that was so extreme I couldn’t eat.

“Finally, I wanted to show my protagonist coming of age sexually on her own. Not through uncomfortable partnered sex (which is how we often see early female sexual experiences on film) but through the exploration of her own body. Most girls explore their bodies long before they have experiences with anyone else, and yet we rarely get to see this portrayed on screen. Yes, God, Yes is, ultimately, a love story between one woman and her vagina.”

At school, she finds there are rumors going around that she has “tossed a salad,” slang for performing anilingus, for a certain boy. She and her best friend are also getting snubbed by kids who have gone on a Kirkos retreat, designed to strengthen one’s relationship with Jesus. So she decides to attend such a retreat, hoping it will quell her burgeoning desires, but she finds them further awakened by a handsome guy who’s one of the leaders, and eventually she realizes not everyone there is as pure as they claim to be. It’s not as horrific as a gay conversion therapy camp, but it’s eye-opening for Alice.

One night Alice leaves the retreat, walking into a nearby town and a bar called Gina’s. In a key scene (watch an exclusive clip below) she encounters the owner, an out and proud lesbian and lapsed Catholic who gives her some sound advice.

Gina is played by Susan Blackwell, who has acted in theater, film, and TV, with credits including [title of show], The Post, Birdman, Madam Secretary, and The Blacklist. She’s a writer and teacher as well. “When I received the audition scenes for this film, it was clear that the role of Gina was a gem, and absolutely pivotal,” Blackwell tells The Advocate via email. “Natalia’s character witnesses so much hypocrisy throughout the film — all around her, what people say contradicts how they behave. Sometimes those contradictions are hilarious, and sometimes they’re excruciating. I love that with Gina, we finally get some sweet relief in the form of a character whose actions and words are in alignment. From the first time I read it, I was really moved by the depiction of this older woman being honest, direct, kind, and authentic with this younger woman. Superbonus: These two short scenes braided together my personal sentiments as a recovering Catholic and my teacherly desire to support people in their quest for freedom. I felt so grateful to play this part, to get to say those words and have them captured on film. Plus there’s a good ‘tossed salad’ joke in there, which appealed to my inner 15-year-old boy.”

Blackwell, who is straight, further notes, “I would be remiss if I didn’t mention this: The conversation around straight actors playing queer roles — and my awareness of that conversation — has evolved, even since this movie was filmed at the beginning of 2018. While in many ways, this character’s words reflected my own point of view and personal experience, there is no question that great queer actors exist who could have played this role — and played it better — because their lived experience even more closely aligned with the queer identity of the character. At the end of the day, I hope that people will watch the film and hear the words that the character of Gina speaks and that those words bring them freedom, peace, and self-acceptance.”

“Though my time on this project was brief, it was a joy,” she adds. “Everywhere I looked were these kickass women kicking ass. The creative leadership, producers, department heads, background performers, my badass stunt double, and my fantastic scene partner Natalia Dyer — I was surrounded by these tremendous, talented women! I loved working with Natalia — she’s wonderful on and off camera. And writer-director Karen Maine is really special. As you can imagine, creative experiences like this are not the norm. I’m excited to work in more environments like this and to contribute to projects that foster even more diversity and inclusion. That’s the world I want to live in.”