All hail Jacob Zuma! In the war on corruption, the man from Nkandla has won 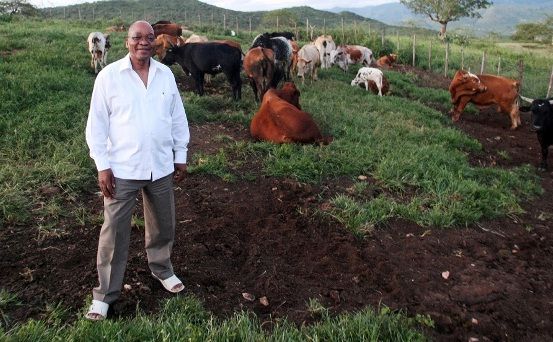 Breaking the institutions was the first step. The second step was to hijack the concepts of legality to pull the wool over citizens’ eyes.

Give the man a Bell’s. Or rather, because he doesn’t touch alcohol, give him his beloved orange juice. Cheers to former president Jacob Zuma. He has won. Zuma and his many supporters in the ANC leadership and elsewhere have won the battle he has waged for more than 15 years to make corruption unpunishable in SA.

In fact, they have won two great victories. The first victory has been to render the institutions that are supposed to bring the corrupt to justice totally useless. On Thursday, prosecutions boss Shamila Batohi admitted, for the second time in a week, that “there’s very few [in the National Prosecuting Authority] that have these skills to investigate very complex corruption matters”.

The second victory has been to hijack and subvert the language of the law to suit themselves and their cronies. The “radical economic transformation” crew now use the words “innocent until proven guilty” to game the law, to clothe themselves in the coats of innocence and victimhood, while they continue with their looting.

Let me explain. The ANC recently announced that it had decided to reinstate two Limpopo officials implicated in the VBS Mutual Bank heist. The party’s deputy chairperson in the province, Florence Radzilani, and provincial treasurer Danny Msiza are back in their jobs despite being directly implicated in the illegal deposit of municipal funds with the bank, in direct contravention of the law. Radzilani – the former mayor of the Vhembe municipality – is named in WhatsApp messages as having asked for a bigger bribe than what she had allegedly received (R300,000 as a “Christmas” gift) from the bank’s directors.

Now, two crimes were committed here. First, the Municipal Finance Management Act is clear that depositing money with a mutual bank is unlawful. The ANC does not need a court of law to tell it this. All ANC officials who participated in this illegal act should have been fired by now. Not a single one has.

Did money from the Vhembe municipality make its way into VBS accounts? Yes. Who is responsible for a breach of a law that every single municipal politician and manager knows? Radzilani and other ANC municipal deployees. You don’t have to wait for the courts to reach this conclusion. What happened to lawful and ethical conduct?

The crime is not confined to Vhembe, Radzilani and Msiza. It is national. According to the Hawks, 20 municipalities deposited nearly R3.5bn with VBS. It’s all gone down the drain. One would think the ANC would be outraged at this. Instead, it is using – conveniently – the “innocent until proven guilty” card.

This card has worked for Zuma. He has used it consistently since 2003. Despite losing numerous times, he is still trying every legal tactic in the book to not face a judge.

That is not his main gambit, though. Zuma knows that no one can prove him guilty. The reason for that is simple. There is no institution to investigate the cases against him properly and take them through an arduous court process. He broke these institutions. Remember that it was the ANC that came back from the Zuma victory in Polokwane in December 2007 and immediately disbanded the Scorpions in one of the swiftest actions the party has ever taken. In just three months the ANC’s parliamentarians had succeeded in destroying the crime-fighting unit.

That is why, last week, Batohi said: “We are now short in trying to rebuild this country. If we don’t address these serious capacity issues in key agencies like the DPCI [Directorate for Priority Crime Investigation, better known as the Hawks], we are not going to win this battle.”
Breaking the institutions was the first step. The second step was to then hijack the concepts of legality to pull the wool over citizens’ eyes. After all, who is against the principle “innocent until proven guilty”? If we did not have this principle SA would be a jungle. It would be a country of lynching and shootings, of mob justice, of no rule of law. So we are all for “innocent until proven guilty”, right?

But what does it mean when there is no chance ever of proving any connected person’s guilt? Those who are accused then sit and enjoy their loot while the cases against them disappear and die while they shout that they are “innocent until proven guilty”. It’s neat.

The point was exquisitely made by constitutional law scholar Prof Pierre de Vos back in 2006, when he wrote: “I have long thought that the use of the ‘innocent until proven guilty’ argument is a complete perversion of the constitution. On one level, yes, Mr Zuma has not been convicted of any crime and he is thus not a criminal … Mr Zuma is innocent until proven guilty and this means he cannot be put in jail.

“But this does not mean that the rest of us must suspend all our faculties and pretend we have no opinion and no common sense view about Jacob Zuma and thus cannot make any moral or political judgment about a man whose friend and financial adviser has just been sentenced by a second court to 15 years in prison because of his … relationship with Zuma. That is really a perversion of the notion of innocent until proven guilty, trying to export the principle (now becoming a slogan) from the legal arena where it is [a] fundamentally important principle, into the political and ethical arena.”

Zuma has won. And the ANC he has so effectively hijacked now illustrates – with the decision on the Limpopo officials and others – that it knows he has won. Not even the ANC’s current president can stop the party’s runaway corruption.