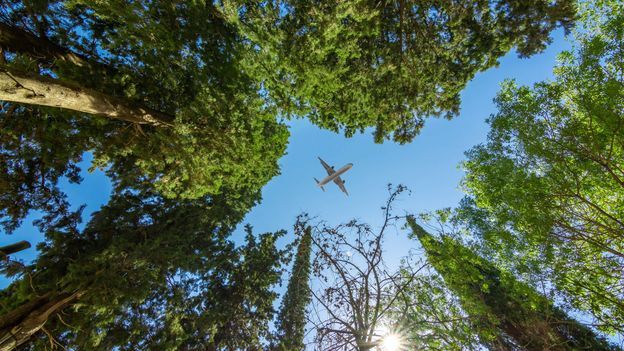 A new wave of carbon-offsetting platforms invites consumers to remove emissions instantly and permanently. Could travellers be the key to their success?

If your 2020 travel plans were cancelled by the coronavirus, carbon offsetting is probably the last thing on your mind. As few as 1% of airline passengers participated in voluntary carbon offsetting before virus-induced travel restrictions took hold, according to The International Air Transport Association (IATA), indicating that purchasing carbon “credits” from your airline or a certified carbon offsetting organisation to compensate for your travel emissions likely wasn’t high on your priority list to begin with.

Yet amid predictions that the drop in global emissions recorded during coronavirus shutdowns may be shortlived, and that the economic impacts of the virus may slow efforts to reduce aviation emissions long term, voluntary carbon offsetting will arguably be more important than ever when the international travel industry is firing on all engines again.

Could a new form of carbon offsetting help to increase traveller participation?

The rise of carbon removal tech

Born out of the Kyoto climate talks in 1997, carbon offsetting has long struggled with an image problem. Offsetting schemes allow people to invest in environmental projects designed to sequester carbon emissions (such as planting trees) or prevent emissions from occurring (such as renewable energy projects), but a lack of regulation and accountability in the early days fuelled widespread distrust of their effectiveness.

More recently, the wildfires that have ripped through Australia, California and the Amazon have magnified the issues involved with forestry-based offsetting schemes (when a tree burns, it releases its entire carbon stash back into the atmosphere).

The difficulty in accurately quantifying most carbon-offsetting programmes (it’s difficult to gauge, for example, the volume of emissions you’ll offset by contributing to a clean cookstove project, an energy efficiency initiative typically funded by offsetting organisations) hasn’t helped.

Then came Climeworks, a Swiss start-up that pioneered a technology that sucks carbon out of the air and turns it into stone, effectively removing carbon emissions from the atmosphere instantly, safely and permanently.

Located on the mossy slopes of an active volcano in south-west Iceland, Climeworks’ first carbon removal plant with a permanent storage facility commenced in 2017. Powered by waste heat from a geothermal energy plant, it harnesses direct air capture technology (DAC) to draw ambient air into giant vacuum cleaner-like machines called CO2 collectors. The carbon is then separated from the captured air, combined with water and pumped 700m underground. Through natural mineralisation, the carbon dioxide reacts with basalt rock and turns into stone within a few years, while the remaining air simply returns to the atmosphere.

Like planting trees and fertilising the ocean, DAC is what’s known as a carbon dioxide removal solution, or negative emissions technology. These solutions typically form the basis of carbon-offsetting projects supported by airlines such as Qantas and Delta, with most carriers now aligned with projects verified by the likes of Gold Standard and the Verified Carbon Standard. Once considered much less important than reducing emissions from the outset when it comes to mitigating climate change, carbon dioxide removal solutions received significant scientific endorsement in 2018 when the publication of the IPCC report on keeping the rise in global temperatures to 1.5C this century identified that these technologies would be essential in reaching climate targets “with limited or no overshoot”.

While most climate scientists agree that a portfolio of carbon dioxide removal solutions is required to help turn back the clock on global warming, the efficiency and measurability of DAC with permanent storage combined with its minimal physical footprint and negligible environmental impact (Climeworks’ side emissions total less than 10% of the CO2 it sucks out of the atmosphere) has seen this technology emerge as a particularly promising approach.

“In terms of efficiency, one tree removes approximately 25kg of CO2 per year, making one Climeworks CO2 collector 2,000 times more efficient per area than a tree,” said Jan Wurzbacher, co-founder and co-director of Climeworks, which in June was named among 100 Technology Pioneers of 2020 by the World Economic Forum.

“Over the last decade, we have proven that direct air capture is not only possible, but also commercially viable on a large scale.”

Climeworks also has more than a dozen other plants in Europe that capture carbon to sell commercially, for use in everything from carbonated drinks and synthetic fuels, which helps fund the permanent carbon removal arm of the business.

In June 2019, Climeworks became the first company in the world to launch a personal carbon removal via DAC service to the public, with a subscription of €7 per month funding 85kg of carbon per year being turned into stone.

Now a new permanent carbon removal platform, aimed at travellers and launched in partnership with the Adventure Travel Trade Association (ATTA), has joined the movement to help offset the whopping 8% of global emissions that the international travel industry is responsible for.

“The findings of the IPCC report, particularly the urgency needed to make impact, deeply affected me,” said Christina Beckmann, vice president of global strategy at the ATTA.

While carbon credits sold by Climeworks and Tomorrow’s Air both go towards turning carbon into stone (with Tomorrow’s Air keeping US$2 from a $10 monthly subscription to fund awareness building), Beckmann is confident that launching a carbon-removal platform incubated by the ATTA, which reaches more than six million adventure travellers, will help motivate more travellers to sign up. Travel perks for “Clean Up Champion”-level subscribers (who pledge US$75 per month to remove 600kg of carbon per year), including travel gear discounts and exclusive destination tips and contacts, sweeten the deal.

If you’ve just done the maths on that, however, you’d have figured out that an annual Clean Up Champion subscription (at a cost of US$900) barely offsets a one-way economy flight from Los Angeles to New York City, making turning carbon into stone very expensive in comparison to traditional carbon-offsetting schemes. To put the price difference into perspective, offsetting a tonne of carbon via German non-profit Atmosfair, which supports Gold Standard-certified sustainable-development projects, costs just €23 (£20.80). But with Climeworks predicting that it will slash its costs by two-thirds within three years, the price gap is closing.

“Ultimately, Tomorrow’s Air will be successful for the awareness it creates as much as for the carbon it removes,” said Beckmann, who recently launched virtual tours of a Climeworks plant in Switzerland via Airbnb Experiences so consumers can see for themselves how DAC technology works. “We know that travellers want to take climate action into their own hands, and Tomorrow’s Air offers an easy and fun way to make an immediate impact while helping to drive the cost of permanent carbon removal down.”

Could this be the new carbon offsetting?

As permanent carbon removal becomes more accessible to travellers through these two schemes, environmental sociologist and University of Southampton research fellow Dr Roger Tyers, who explored carbon offsetting in his PhD, says it may help to bolster the offset industry.

“More measurable offsets like direct air capture (either for permanent removal or for creating alternatives to fossil fuels) could lift standards across the whole offset market,” he said. “They might also help shine a light on cheaper and less effective offset schemes that have dominated the market so far, which are often too good or cheap to be true.”

Until carbon removal with permanent storage becomes more financially viable for travellers to adopt, other offset providers perhaps shouldn’t be too worried about losing customers. But the founders of Climeworks and Tomorrow’s Air hope that the need for urgent action on climate action will encourage travellers to incorporate permanent carbon removal into their carbon offsetting strategies sooner rather than later.

“Travellers should not stop making other sustainable choices – we need them all,” Beckmann said. “But by contributing a percentage of their offsetting budget to carbon removal with permanent storage, travellers can show their support for this faster and more durable solution.”

However, as international borders slowly begin to reopen following coronavirus lockdowns, Tyers advises that carbon dioxide removal via turning carbon into stone, just like any other form of carbon offsetting, shouldn’t be viewed as an excuse to book a long-haul holiday with a clear conscience.

“Until we come up with a genuinely sustainable way of flying people around the planet, we need to fly less,” he said. “It’s as simple as that.”

Future of Travel is a series from BBC Travel that investigates what the world might look like to travellers in the coming years and meets the people living on the frontlines of change.