SELLING IMAGES OF YOUR BODY 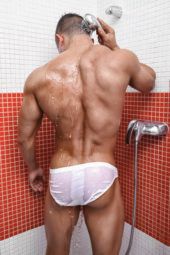 Should we be paying for Only Fans subscriptions? Is there a difference between selling your body and selling images of it?

“No! Don’t do it!” one response screamed from the screen, while another told this person not to degrade themselves like that. Responses like these struck me as odd, considering this person’s feed is already full of his she-bop and dirty tango videos for his thousands of eager followers to fap to. Why would the mention of a Fans Only account, where you have to pay to view the content, now have his followers up in arms? I think the answer is a simple one. People would have to pay to view the content and this would in turn make his viewers see him, for lack of a better word, as a “whore”. He would be incorrectly seen as selling himself when all he would be doing is selling videos and images of himself.

Whether we want to admit it or not, we live in a society where some men, both hetero and homosexual, feel that sex should be free and believe that they are entitled to sexually access people. This means that they place no value on nudes, are of the opinion that sexual labour is not labour and that sex should not be monetised. These men are in fact “whorephobic”. They become uncomfortable with the idea that someone would be willing to use their sexuality to make money. No consideration is given to the labour that is involved with selling sex and people only focus their attention on the final product which is the video they drool over. Some men claiming an imagined moral high ground, “slut-shame” people who are taking control of their sexuality, and by that I mean taking control of what they do and who they do it with. Gay men who police those who are willing to take charge of their sexuality and use it to make money, are simply recreating the hierarchies and structures of oppression from heteronormative society that we should be trying to dismantle.

The use of the internet and technology to upload content and partake in live video streams and consume sexual content, allows even disadvantaged groups and people to participate fully in a social life, including a sexual one. Choosing to upload your sexual images onto a site where you can earn money from them or even if they are viewed for free, breaks down the barriers to pleasure and the anti-pleasure ideologies of colonial, predominantly Christian thinking. These individuals are choosing to embrace pleasure, autonomy and self-determination.

Through this autonomy, online sexual performers are creating an economy of ideas. They may have no hierarchical access to economic or to political and cultural power and are now, through their profiles, helping to create a sexual culture that obtains a political force when it comes into contradiction with political and economic logistics. These performers have bypassed traditional structures and are taking their financial security into their own hands (no pun intended). Their bodies become a political force when we consider the ways in which society police bodies and sexuality. They have made decisions that affect their lives, such as when to work, how to work, what working hours deserve a desired income instead of having those decisions made for them.

We need to remember that we are free agents who have autonomy over our own bodies. We should be free to make our own choices, no one should enslave us, boss us or make decisions for us. The choices we make regarding the direction our lives take and what we do with our bodies is ours alone. Lindi Helené, in her journal article Fuck It! New Media Art, Design and (re)presentation, states, and I would like to conclude with this, “cyber-sex practitioners have become sex liberators. They are acting to uphold basic rights of autonomy, freedom of expression and resistance. They are the new emancipators of the new era of censorship.”