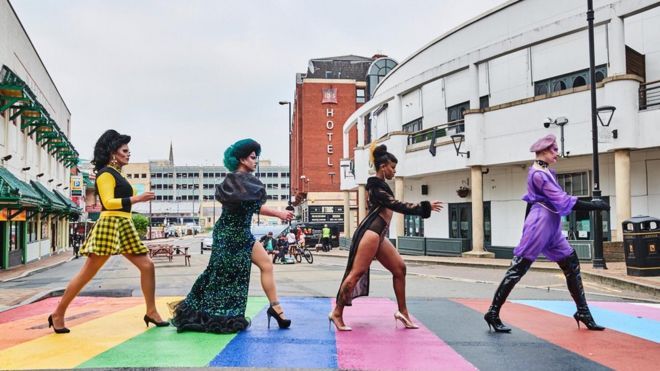 Birmingham’s LGBTQ+ community will be able to “cross with pride” as a rainbow walkway is unveiled in the city.

The artwork was designed as part of the city’s Pride celebrations in May but the event was cancelled because of the coronavirus restrictions.

Friday’s unveiling coincided with the temporary pedestrianisation of part of the city’s Southside area which is home to Birmingham’s Gay Quarter.

Artist James Cowper said it had brought a much-needed “burst of positivity.”

The graphic designer, who is also a drag performer under the name Gavina, said the artwork was commissioned by the Southside Business Improvement District (BID) at the beginning of the year.

“But the paint has sat in my dining room for months,” he said.

The artwork is based on the Progress flag which adds a chevron and extra colours to the traditional rainbow flag.

The eleven colours are important as it reflects the diverse drag community in the city, Mr Cowper explained.

“We not only have drag queens and drag kings, but bio queens and members of the trans community as well as people of colour – that’s why Birmingham’s drag scene is so fantastic.”

Southside district manager Julia Robinson said she had given the go-ahead for the Hurst Street walkway “so that people can cross with pride.”

“It’s been so well-received we’ll certainly be looking at making a permanent crossing in future.”

PrevPreviousAlex the Astronaut: ‘I didn’t want to tell anyone that I was gay, let alone millions of strangers’
NextUmbrella Academy’s Ellen Page & Marin Ireland on Hopeful Queer LoveNext