WHO WILL ANSWER FOR COVID-19’S DARK SCIENCE? 10 MYTHS BUSTED 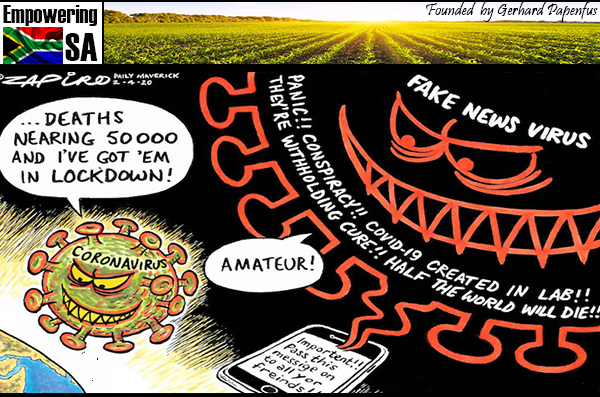 Brian Pottinger, former publisher and editor of the Sunday Times, has been watching the global – and South African response – to the Covid-19 pandemic with deepening mistrust. Here, he examines the myths which he says have grown up, or been perpetuated, around the disease. From fatality rates to epidemiological models, and from medical treatments to statistical models, he takes on much that is accepted wisdom about the virus.

In South Africa, he concludes, the real plague proved not viral but human: the corruption of a ruling party which for too long has operated like an organised criminal conspiracy. Pottinger has been stirred out of retirement to write a book about the pandemic entitled States of Panic: Covid-19 and the New Medieval. We think it will be a humdinger of a read. – Renee Moodie
THE TEN GREAT MYTHS OF COVID-19: 2020
A World Health Organisation team is in South Africa to review how well we have handled the Covid-19 pandemic. It has arrived to find a mortally wounded economy and a deeply resentful public, for which it shares part of the blame.

As infection rates start peaking and declining across the country, as we knew they would, it is at last time to examine the ten revealed great myths of this human-made disaster.

The first myth is that the Covid-19 is so virulent that we had to close down the world. The initial modeled Case Fatality Rate, a measure of the severity of an outbreak, has been in free fall since initial estimates derived from China put it at 5.7 per cent.

Latest analysis suggests Covid-19 ‘s global CFR will settle at something between a normal influenza outbreak and the more severe decadal viral outbreaks the species has survived countless times without a shiver. South Africa, using the WHO’s own modeling, is likely to end up with a CFR of no more than 0.14 per cent.

The second myth is that the academic epidemiological modelers, masters of the “science” we were all supposed to follow, knew what they were doing. They did not have a clue.

The original modeling by the South African epidemiologists posited a death toll of between 87 000 and 350 000. Later models by the body of scientists advising the Government put it down to 48 000 by September: 10 000 by end June, 30 000 by end July. Well, the early dates have come and gone and they were wrong by 75 per cent for both months.

The third myth is that public health services would be overwhelmed by the flood of Covid-19 cases. Apart from Covid-19’s point of first European landfall in Bergamo, Italy, no overwhelming of services has occurred in Asia, Europe, the United Kingdom or the United States. Emergency hospitals erected at enormous cost have been dismantled without admitting a single patient. We are on track for the same here.

The fourth myth is that Covid-19 patients were in urgent need of massive intubation and ventilation. The European, British and American experiences soon revealed the opposite: intubation was the worst thing for elderly or very sick people who are overwhelmingly the victims of the virus.

Despite this fore-knowledge, the South Africa authorities issued tender invitations for astronomical quantities of ventilation equipment and oxygen. Why?

The fifth myth, the biggest, is that the WHO’s “confirmed” case and fatality numbers are indeed confirmed. The WHO and some of its associated data collection agencies have constantly expanded symptom definitions and short-cut established verification processes, thus fatally blurring the lines between those who died from Covid-19 and those with it and even creating uncertainty about whether some ever had it.

The direct effect has been a surge in unsubstantiated case and fatality numbers. Remarkably, the mainstream media failed to pick up, or chose to ignore, the obvious linkage between shifting surveillance and reporting methods and statistical output.

In the United Kingdom the 32 500 seven-year average Excess Winter Deaths (EWD’s) was smoothly scooped up as Covid-19 suspects. In the United States, a 2018/19 seasonal influenza toll of 61 200 became 6 426 in the 2019/20 one. The difference was repurposed as Covid-19. In South Africa, influenza fatalities have disappeared this season: they are now all branded Covid-19. It is the ultimate statistical body-snatch.

More, the daily reported cases on the WHO dashboard and by national agencies do not reflect real-time transmissions of the virus. Many are past cases turned up by increased surveillance and batch-reported, thus creating the impression of cluster outbreaks.

These “outbreaks” are routinely and dishonestly promoted by the WHO as the start of a mythical “Second Wave”. Such “waves” in the United States, France and Spain have failed signally to translate into fatalities but that has not stopped hysterical governments and national health services re-imposing quarantine measures for a virus we now know to be of hugely reduced virulence.

So egregious have become the WHO’s attempts to promote the “Second Wave” that it has earned an official rebuke from Sweden for misrepresenting its numbers and the WHO representative in Equatorial Guinea was thrown out for much the same.

Watch this space: Covid-19, WHO, governments

Here a word of caution and explanation. The WHO and its network of epidemiologists have an unbroken record of the grossest exaggeration of epidemiological numbers and fatalities. This, after all, was the organisation that took a provable 18 000 fatalities in the Swine Flu outbreak in 2009/10 and post-facto modeled it to between 151 700 and 575 400 deaths.

The income streams and research grants of these organizations depend on exaggeration: why else would anybody fund or listen to them (the cash-strapped WHO quadrupled its annual income off the back of Covid-19). Will its advice to the South African government on this trip be to change our hitherto commendably rigorous basis for Covid-19 surveillance? Is that why we are reaching back to test as many ex-hospital deaths as possible to remodel the course of the outbreak? Watch this space.

The sixth myth is that the government, healthcare professionals and scientific academic epidemiologists should be forgiven their errors because they were dealing with a “novel” virus and were correct to over-react. All they had to do was read recent history.

A European Parliamentary inquiry into the 2009/10 Swine Flu outbreak found that the WHO had deliberately exaggerated the severity of the outbreak, inflated fatality numbers, conspired with pharmaceutical executives to sell an ineffective vaccine and caused a massive diversion of public health resources. These charges have never been satisfactorily answered.

Ample evidence was available as early as March 2020 that Covid-19 was climate-influenced, spread by cluster infections, overwhelmingly attacked the old and those with co-morbidities, was less likely to claim a young person’s life than a lightning strike, was in all likelihood self-limiting, had a pathogenic intensity far less than originally assumed and demanded a greatly reduced high-care bed capacity. The South African government and its advisors ignored these early lessons from the northern hemisphere coronavirus season in designing our pandemic control measures. Why?

The seventh myth of COVID-19 is that governments had no option but to enforce national lock-downs. Early on it was known the virus spread by cluster infections. Agile, organised and disciplined countries like China, South Korea, Singapore and Taiwan understood this and acted effectively to contain localised outbreaks. China quashed the outbreak in two months with fewer than 5 000 fatalities by quarantining less than 0.8% of its population.

Western countries with their sclerotic and decaying public health care systems (South Africa in sad company) were unable to respond in the same way. We were locked up, not because of the virulence of the virus but because the healthcare systems failed us at a critical juncture.

Latest research effectively disputes that there is a correlation between strict lock-down countries and containment of the virus. New York, strictly locked down, saw 25 per cent of its population infected with Covid-19. London, ditto, saw 17 per cent. Sweden, with no lockdown but rational quarantine, distancing and personal protection protocols, saw 7.3 per cent: exactly the infection reach one would expect from a normal annual influenza outbreak.

The eighth myth is that all of this was to “save lives”. Perhaps, but the number is unknowable. What is known is that the denial of medical services to the public, the delaying of critical procedures and the withdrawal of a needlessly terrified public from engaging the health services at all has created a long tail collateral death toll which will exceed the real Covid-19 death roll.

Finally, the tenth myth, was that our President, cabinet and ruling party would wisely, rationally and effectively use the total powers thrust into their hands by a trusting public and media.

The lockdown, never epidemiologically justified in any case, was too early: the climate was wrong, as research available as early as March said it would be. When the predictable rise in infections occurred as the climate changed, first in the Western Cape and then elsewhere, containment measures were lifted in sometimes comically contradictory ways for the simple reason that the economy was collapsing.

Promised government aid failed to arrive due to incompetence and looting. Predictably, the real plague proved not viral but human: the corruption of a ruling party which for too long has operated like an organised criminal conspiracy.

By the end of June 2020, for every reported infection in South Africa, seven citizens had been arrested for breach of the regulations. For every hundred infections, one police officer had been indicted for a crime under the National Disaster regulations and for every 1 200 infections, one High Court action had been lodged by an aggrieved party. What a way to run a pandemic.

So a last thought. The politicians will answer to the electorate and the civil courts for what they have done; the public servants to the government, sort of; the looters to the criminal courts (wink). But to whom will the WHO and the scientific-academic epidemiological modelers and their dark science answer?
READ ORIGINAL ARTICLE