Lili Reinhart: Being bisexual is not just ‘a phase’ 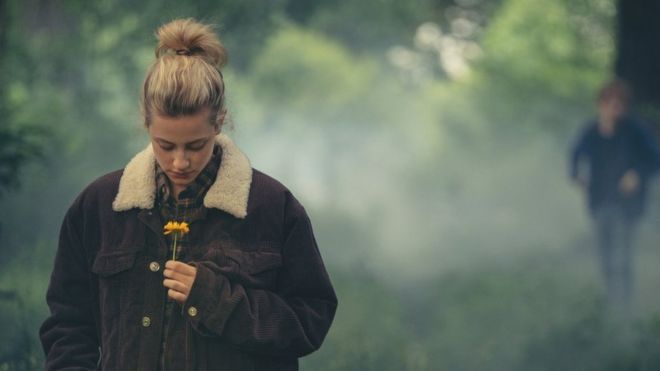 Actress Lili Reinhart has welcomed Disney creating its first bisexual lead character in the animated series The Owl House, saying that “too often people have told me it’s a phase”.

The Riverdale actress, who came out as bisexual in June, says she’s glad the character of Luz Noceda in The Owl House now exists, “as I’ve been met with comments of ‘you’ll grow out of it’ but I know that’s not true”.

“I think it’s important to make it more normal, as I feel in cinema and TV, the characters are usually gay or straight, there’s not a lot of bisexual characters – but it should be normalised,” she adds.

“There are a lot of bisexual people, including me. Before, I felt that people were going to invalidate what I was saying by telling me I was going through a phase.”

Reinhart plays Grace in the new Amazon film Chemical Hearts, an aloof teenage girl who wears androgynous clothing and walks with a cane.

She captures the heart of hopeless romantic Henry, played by The Walking Dead’s Austin Abrams, but he discovers she’s weighed down by trauma and grief.

It’s based on the best-selling young adult novel, Our Chemical Hearts by Krystal Sutherland, but Reinhart, who also produced it, believes that “it’s not another teen romance”.

Since finding fame in Riverdale, Reinhart went on to star in 2019’s critically acclaimed all-female drama, Hustlers, and explains that “at this point I’m trying not to play too many teenage characters”.

“I want to play something creatively different from Riverdale, so I was a little bit nervous of another teen character. But when this came along, I thought those characters could be in any setting, not just high school.”

It’s also important, she believes, to show teenage heartbreak from a male point of view, “because normally we’re following the girl and the girl’s heartbreak”.

“But this is written from the guy’s viewpoint, he’s trying to get her attention and struggling to get to know her. It’s something a lot of people don’t explore in the young adult space,” she adds.

The actress, who was born in Ohio and moved to LA as a teenager, has spoken openly about her struggle with anxiety and depression, and says she wishes there had been more resources available to help her during her schooldays.

‘I wasn’t fully aware of the resources out there when I was younger,” she explains. “If only someone had told me I could listen to a podcast about depression, or watch a TED talk about how to live life to its fullest.

“It should be implemented into a class at school where you could talk about what you do to take care of your mental health. I’d have loved someone normalising the anxiety I suffered, because when I had my first panic attack in eighth grade, I did not know what was happening to me, I didn’t understand it. None of my friends had experienced it and it was so scary.”

She also urges LGBT teenagers “to understand how many options we do have in this day and age”.

“Times are changing, and at school, there was one gay kid who was out and comfortable with it, but some people were hiding their sexuality because they were afraid to come out.

“I hope people know they have outlets and communities who are now so willing to support young people facing decisions about this. There’s a lot of open arms out there.”

But Reinhart says she still suffers from anxiety and that it’s become more intense as she’s got older,

“I do try to combat it. I do therapy weekly and I practise meditation, I try to be present and enjoy the present. I don’t want to look back and think I wasted my life,” she says.

“In this film, you see a lot of anxiety. With Henry’s character especially, a lot of times in your life when you’re in love with someone, you get an idea of who you want them to be and you’re holding out for them to change.

“That’s something that everyone who’s been in a relationship or in love can relate to – I know I can. You’re waiting for someone to evolve into the person that they’ll be, but that’s a really unrealistic expectation and it’s a selfish way of looking at love, because it benefits you. Henry wants Grace to change on his timeline.”

The actress is reported to have broken up with her Riverdale co-star Cole Sprouse earlier this year and has some advice on getting through heartbreak.

“Hoping solid ground won’t shift is very unrealistic. Heartbreak and trauma are truly part of life and it’s unfortunate, but also going through life trying to avoid heartbreak is impossible.

“If you set yourself up with that expectation, you’re going to be disappointed. It shouldn’t stop you from pursuing love. I’ve never let the fear of heartbreak stop me.”

Chemical Hearts is released on Amazon Prime Video on 21 August.