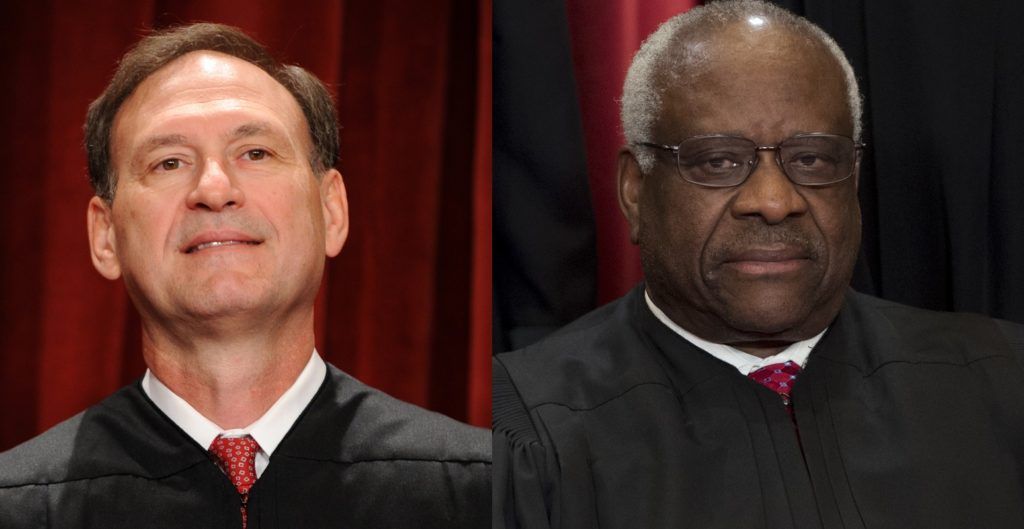 Supreme Court justices Clarence Thomas and Samuel Alito have launched an extraordinary attack on the ruling that led to equal marriage, claiming that people who discriminate against gay couples are ŌĆ£victimsŌĆØ of the law.

On Monday (October 5), the two justices penned a┬Āstatement┬Āas the court declined to consider┬Āa case brought by┬ĀKim Davis, the Kentucky clerk who refused to carry out her job processing marriage licenses when gay couples were permitted to wed in 2015.

Davis, who has been married four times to three husbands,┬Ābecame a cause celebre among anti-LGBT+ evangelicals┬Āwhen she claimed she was unable to marry same-sex couples because of her Christian values.

Although Thomas and Alito affirmed the courtŌĆÖs decision not to hear the Davis case on procedural grounds, in the statement they launched an extraordinary broadside on the┬Ā2015┬ĀObergefell┬Āruling┬Āthat legalised same-sex marriage across all 50 states.

The pair lauded Davis as ŌĆ£a devout ChristianŌĆØ with ŌĆ£sincerely held religious beliefs,ŌĆØ lamenting that ŌĆ£as a result of this courtŌĆÖs alteration of the constitution, Davis found herself faced with a choice between her religious beliefs and her jobŌĆØ.

Thomas and Alito, who were among the dissenters against marriage equality when the court split five to four on the issue in 2015, continued: ŌĆ£Davis may have been one of the first victims of this courtŌĆÖs cavalier treatment of religion in its Obergefell decision, but she will not be the last.

ŌĆ£Due to Obergefell, those with sincerely held religious beliefs concerning marriage will find it increasingly difficult to participate in society without running afoul of Obergefell and its effect on other anti-discrimination laws.

ŌĆ£It would be one thing if recognition for same-sex marriage had been debated and adopted through the democratic process, with the people deciding not to provide statutory protections for religious liberty under state law.

ŌĆ£But it is quite another when the court forces that choice upon society through its creation of atextual constitutional rights and its ungenerous interpretation of the free exercise clause, leaving those with religious objections in the lurch.ŌĆØ

The pair continued: ŌĆ£This petition provides a stark reminder of the consequences of Obergefell. By choosing to privilege a novel constitutional right over the religious liberty interests explicitly protected in the First Amendment, and by doing so undemocratically, the court has created a problem that only it can fix.

ŌĆ£Until then, Obergefell will continue to have ruinous consequences for religious liberty.ŌĆØ

While the attack is largely symbolic, the intervention will only stoke fears that conservatives on the court, who would be emboldened with a six to three majority if┬ĀDonald TrumpŌĆÖs latest nominee Amy Coney Barrett is confirmed by the Senate, could drastically undermine LGBT+ equality in a future case.

On November 4, just one day after the US election, the court is┬Āset┬Āto hear arguments surrounding Catholic Social Services (CSS), a Philadelphia-based adoption and foster care agency that insists it should be allowed to turn away same-sex couples and still receive taxpayer funding.

The case has caused┬Ājitters┬Āamong LGBT+ rights advocates, as even recent victories on LGBT+ discrimination protections┬Ācame with explicit warnings┬Āthat civil rights laws could be overridden by religious freedom concerns.

Several other ŌĆ£freedom to discriminateŌĆØ cases┬Āare working through the lower courts, many brought with the support of anti-LGBT+ hate groups who have┬Ālong set their sights┬Āon attempting to carve out a specific protection for discrimination against LGBT+ people under the First AmendmentŌĆÖs protections for religious freedom.

Chase Strangio of the ACLU┬Āexplained in a Twitter thread┬Āthat the statement suggests the justices ŌĆ£are eager to overturn Obergefell already ŌĆö even though it is only five years old.ŌĆØ

The Alliance for Justice agreed the intervention is ŌĆ£extremely concerning.ŌĆØ The group added: ŌĆ£Marriage equality, or any force it might carry, is 100 per cent threatened by Amy Coney BarrettŌĆÖs nomination. The courtŌĆÖs conservatives are clearly chomping at the bit to chip away at it.ŌĆØ

LGBT+ civil rights firm Lambda Legal said: ŌĆ£Republicans and the Supreme Court are gleefully coming for marriage equality, and they think that TrumpŌĆÖs SCOTUS nominee Amy Coney Barrett gives them the opportunity to do it.ŌĆØ

PrevPreviousCovid infections seem to have gotten milder over time, research shows ŌĆö perhaps because of masks
NextJapan: Japan Airlines will swap ‘ladies and gentlemen’ for gender-neutral terms on its in-flight announcementsNext