PANDA wants to be heard 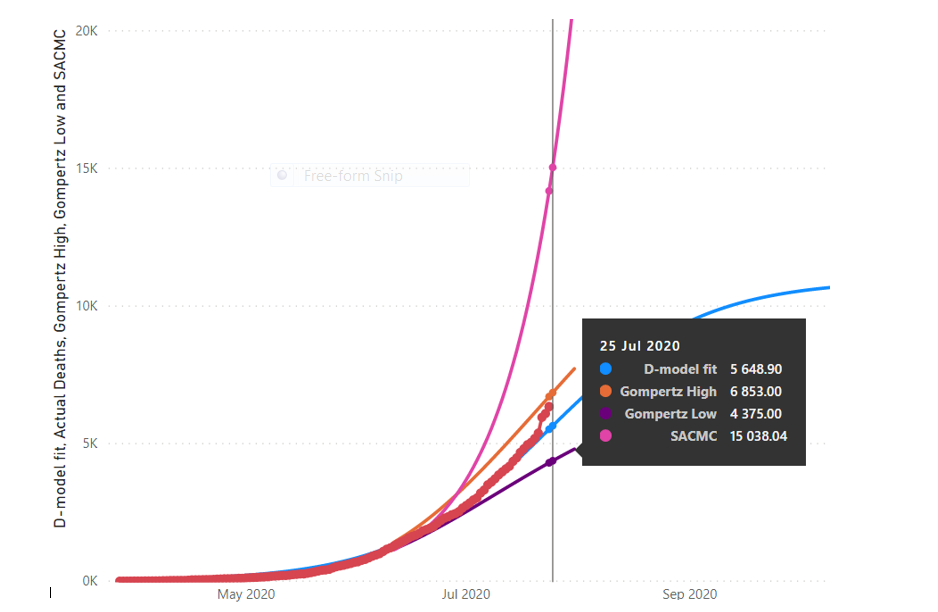 Dr Harry Moultrie of SACMC’s article regarding its Epi Model for Covid was well received, suggesting a near-term release of their model’s assumptions and code, as we and others have been requesting for some time.

PANDA published its Western Cape and South African models to coincide with the Epi Model update and they continue to perform well, despite having much narrower confidence intervals than the Epi Model.

However, this has resulted in PANDA receiving a slew of requests from doctors, hospital administrators and journalists all over the country who had become frustrated with the NICD’s guidance and wanted a steer from us on what they should plan for.

We are a small, not-for-profit business staffed by part-time volunteers, and do not yet have the infrastructure to deal with such requests, as much as we’d like to.

The NICD have constantly declined to engage with us, but we would like to propose a way out of the morass. First, a few observations: We get the sense from comments on our Twitter feed that SACMC members’ objection to our modelling approach has more to do with it being descriptive (based on analysis of international epidemic curves and a study of inter-country mortality variations) as opposed to having a theoretical causal structure, as have the SEIR-type models, on which the Epi Model is based.

Though the “Gompertz” curves that we deploy, as proposed by Nobel laureate Professor Michael Levitt of Stanford University, achieve very good fits to observed experience elsewhere, there is a type of epidemiological model, the so-called “D-model” – introduced to us by Dr Azwinndini Muronga of NMMU – which we have found to fit almost as well as the Gompertz curves.

The diagram above includes a D-model fit for South Africa, which we have been evaluating since 10 July.

Note its similarity to the Gompertz curves, which form the lower and upper confidence intervals and within which the data for South Africa, Gauteng and the Western Cape have been tracking since the calibration on 10 June.

We note the recent aberrations in death reporting for both the Eastern Cape and Gauteng and consciously describe these even though it must be argued that smoothing would be justifiable.

An advantage of the D-models is its mathematical simplicity. They have closed form solutions and can easily be implemented on a spreadsheet in a few hours – no need for pages of code or numerical solutions to complex differential equations.

A potential sticking point is that D-models assume that recovered individuals are not reinserted into the population. This is equivalent to assuming that the infected population is set up rapidly or that the infection process is not mainly dependent on human-to-human contact. The good fit of the D-model may surprise in the context of Covid-19 given that:

This calls into question whether the other key assumptions underpinning the D-model are correct. These classically involve a random walk process generating human contact, uniform mortality and binary (as opposed to graduated) susceptibility. If those assumptions are wrong for Covid, this could explain why the SEIR models being so widely applied cannot be made to fit empirical data as closely as Gompertz and D-models.

Nevertheless, we beg the NICD to consider taking up this proposal, so that it can provide useful estimates to our healthcare institutions, who desperately need them.

To do so effectively, it would have to adjust some assumptions and infer ICU and hospital bed demand from death numbers described, for which purpose sufficient data are at hand.

Based on rumour and reverse-engineering, we understand that the Epi Model deploys a susceptibility parameter of approximately 20% and an infection fatality rate of approximately 0.4%. This is similar to the result from the New York State seroprevalence study.

We think the latter is too high in the context of the former, given differences in the age structure, comorbidity prevalence and obesity prevalence in the South African population, and would suggest moderating this to 0.1%.

Our assessment is that SEIR-type models have generated bad fits to the data, no matter what assumptions are used and despite having more parameters.

Note that none of these Gompertz and D-models make any assumptions regarding continuation or suspension of lockdown, because nothing in the international data suggests that lockdown stringency or mobility has any material curve-flattening effect.

This observation comes from detailed statistical analysis of single country curve behaviour following lockdown inception and cessation, and from an inter-country analysis that found no correlation between lockdown stringency and country mortality rates or durations to peak deaths.

We had come to suspect it given the universal fit of the Gompertz models, which would be inconsistent with there being any impact from mitigation measures in general. We have reviewed several papers claiming to find beneficial effects from lockdown, but these have found small effects, which can safely be ignored, and are methodologically dubious in any event, and therefore unlikely to survive replication.

Also note that the model does not make any downward adjustment for “deaths with” Covid. These will not place the same kind of burden on resources as “deaths from” Covid, so it is important to have an estimate for them.

Our observation of the US data indicates that the proportion of “deaths with” may be significant. We have heard many accounts of the same thing happening in South Africa, despite the excellent guidance note of Dr SSS Buthelezi (Director General of Health). This may go some way to explaining the rest of the Epi Model’s 10x overestimate for Western Cape ICU demand, which would not be totally removed by the re-parameterisation suggested above.

We remain willing to engage and share our models with the NICD and sincerely hope its position towards us moderates.

We have further ideas around a scaling approach that might be adopted to reduce the provincial models to single-institution forecasts, which hospitals are likely to find useful.

Such an approach would relieve us from an administrative burden we are incapable of meeting and put an end to what has become an unseemly public exchange between PANDA and the NICD.