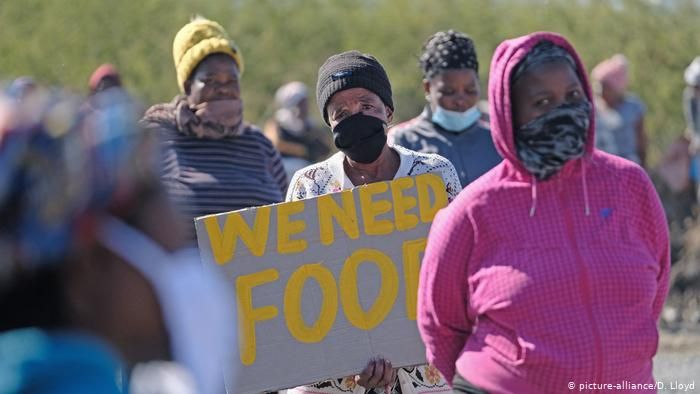 As the number of coronavirus cases increase in South Africa, there are growing concerns over widespread corruption involving funds meant to deal with the COVID-19 pandemic.

South Africa has registered more than 500,000 COVID-19 cases  — making it the hardest-hit country in Africa. The country’s recorded cases represent just over 50% of all reported infections in 54 African countries.

According to figures by Johns Hopkins University, South Africa, with a population of about 59 million, is ranked fifth in the world in terms of COVID-19 cases. It falls behind the US, Brazil, Russia and India respectively  — all these countries have a  bigger population than South Africa.

The virus is taking a toll on the southern African nation’s health sector, which being overwhelmed by a growing number of patients.

In Gauteng and Western Cape, the worst affected provinces, exhibition venues and convention centers are being turned into emergency hospitals.

According to Martin Kingston, leader of the Business for South Africa Organization, the worst is yet to come. “We think that the surge which is clearly upon us is likely to peak towards the end of August leading into September,” Kingston told DW.

“So, we expect increasing levels of both infection and, of course, mortality throughout the balance of the year.”

Those working on the frontline of fighting the virus face a stiff challenge caused by issues with personal protective equipment (PPE).

Massive corruption surrounding the purchasing and supply of PPE puts the workers at risk when taking care of patients.

The graft involves overpricing, substandard products and services, and giving tenders to those connected to the government and the ruling party.

Anti-corruption groups in South Africa say that in Gauteng alone, some 91 companies who received purchase orders from the Department of Health are under investigation.

Amongst the top officials being investigated is President Cyril Ramaphosa’s spokesperson Khusela Diko. Her husband allegedly scored a $7 million (€5.9 million) tender. The Gauteng provincial minister of health, Bandile Masuku, and his wife have also been put on special leave over COVID-19 related tender corruption allegations.

President Ramaphosa said his government is working to ‘root out corruption’ in the purchase and distribution of medical equipment. “It is unconscionable that there are people who may be using this health crisis to unlawfully enrich themselves,” said Ramaphosa.

At least nine civil society groups have written to South African authorities demanding action be taken against state officials, private companies and individuals who are siphoning funds meant to deal with COVID-19 in Gauteng province.

More than a third of recorded COVID-19 cases are in Gauteng — South Africa’s financial hub and coronavirus epicenter.

The organizations said it was a shame that individuals were stealing at a time when the country faced reports of malnutrition, retrenchments, business closures and communities being unable to access health care and other services.

“Our country has had to borrow money from the IMF to deal with the crisis. Yet, for the ruthless ‘covidpreneur,’ and those within the state and other institutions who enable corruption, this is simply an opportunity to exploit the situation,” a statement by the organizations read.

The International Monetary Fund (IMF) approved $4.3 billion in emergency support for South Africa to help the nation deal with the COVID-19 pandemic. The organization said the money would assist South Africa in coping with the unfolding deep economic recession resulting from the COVID-19 shock.

Corruption Watch — one of the organizations that petitioned the South African authorities to take an action — said the issue of corruption was “extremely serious.”

“It has been acknowledged as such by the presidency,” Karam Singh, head of legal and investigations, told DW.  “It was not unexpected given the increasing systemic challenges posed by corruption and the heightened corruption risks created by the mobilization of funds to address the pandemic.”

The current corruption scandal is not only in Gauteng. According to Zaakirah Vadi of Ahmed Kathrada Foundation, the vice is rampant at all provincial treasuries, health departments and within municipalities.

“There have been reports of food parcel corruption in different provinces over the last few months, a form of corruption that has impacted at a very local level. And this is just what we know of for now, publicly,” Vadi added.