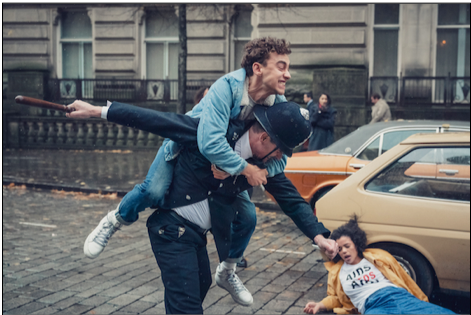 Years and Years frontman Olly Alexander is front and centre in the first-ever tease of Russell T Davies star-studded drama It’s a Sin, set during the AIDS epidemic.

The five-part drama from the Queer as Folk creator is set to air on Channel 4 in 2021 and kicks off in 1981 as three young gay men, Ritchie, Roscoe and Colin, begin a new life in London.

Initially strangers, the men go on to form lasting friendships with their best friend Jill – but in the background, HIV is spreading, putting their lives at risk.

Alexander, who plays Ritchie in the highly anticipated new series, is front and centre in the first teaser trailer, released on Friday (2 October).

In the teaser, Alexander’s character Ritchie plays the song “It’s a Sin” by the Pet Shop Boys on a jukebox in a bar, before he catches sight of a handsome barman.

It’s a Sin, originally titled Boys when details of the project were announced in 2019, has not yet been given an air-date, but will be broadcast on Channel 4 in 2021.

Speaking about the series, Davies said: “I lived through those times, and it’s taken me decades to build up to this. And as time marches on, there’s a danger the story will be forgotten. So it’s an honour to write this for the ones we lost, and the ones who survived.”

Alexander said he feels like “the luckiest boy in the world” to star in It’s a Sin.

“I’ve been a fan of Russell T Davies ever since I watched Queer as Folk in secret at 14 years old,” he said.

“His work helped shape my identity as a gay person so I’m absolutely over the moon we’ll be working together. The script was amazing to read, I laughed and I cried a lot, it’s a privilege to be helping to tell this story and I’m so excited.”

Meanwhile, Neil Patrick Harris said he is “pleased” and “incredibly proud” to be a part of the series.