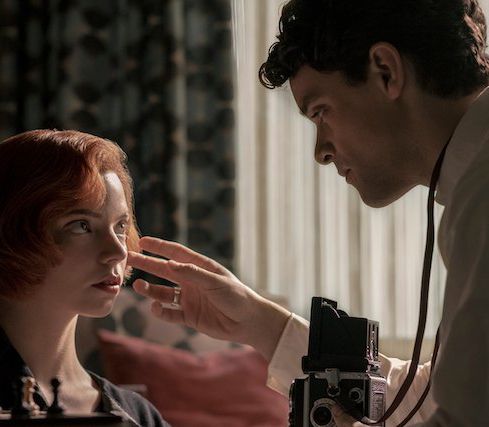 The series features several queer characters that lend to its rich storytelling.

Now at nearly 22 days at number 1 on Netflix, The Queen’s Gambit is poised to break a record in that slot set by Tiger King earlier this year. An internet search of the series that stars Anya Taylor-Joy (Emma., The Witch, Thoroughbreds) as Beth Harmon, an orphan and a chess prodigy who takes on that world of men in the ’60s, turns up dozens of articles applauding the show’s perspicacious understanding of chess, its stylistic flourish, and the performances, particularly by Taylor-Joy and Can You Ever Forgive Me? director Marielle Heller as her melancholic adoptive mother, Alma.

Spoilers if you have not seen episode 6 of The Queen’s Gambit.

But it’s also the second massive hit series on Netflix this fall with a queer female lead. Additionally, the only man Beth says she’s ever loved is a gay man who loves her deeply, although platonically. It’s a series about competition,  addiction, the endless beauty of chess, and being a woman in a world dominated by men, and it’s also deeply queer.

While Netflix’s Ratched, which dropped in September, centered Sarah Paulson’s Mildred and Cynthia Nixon’s Gwendolyn in a queer relationship, evidence of Beth’s tryst with a woman is over in a blink in the sixth episode. But it is a catalyst for Beth losing badly for a second time to the world champion Russian chess star Vasily Borgov (Marcin Dorocinski) that sends her on a destructive spiral and eventually on an upswing that brings Beth her greatest success.

The moment is so pivotal in the series based on Walter Tevis’s 1983 novel that the entire show begins with snippets of a scene in a Paris hotel room in which Beth is presumably still drunk and strung out from a night of partying. As she heads out to her match against Borgov, bleary-eyed, she gazes at someone in her bed. A tousled head of dark hair is all that’s visible from the camera angle. Then, The Queen’s Gambit’s first episode starts from the beginning in Beth’s childhood and with her chess prodigy origin story. The audience doesn’t see who’s in her bed for several episodes to come.

In episode 6, titled “Adjournment,” Beth begins immersive training in New York City with the former United States champion and her once rival, now lover Benny (Thomas Brodie-Sangster). He invites a group of friends over to challenge Beth to simultaneous chess play. She handily beats Benny and two male friends at chess, but it’s their friend Cleo (Millie Brady), a mod French model with irresistible ennui, who captures Beth’s attention. Later in the episode, when Beth is studying her game in her hotel room, Cleo invites Beth to drinks. Beth declines initially but later joins Cleo in the bar of the hotel, where they play their own kind of game of flirting and retreating. “Do you like to fuck?” Cleo asks Beth, finally, truly throwing her off her game. Later in their conversation over pastis cocktails and cigarettes, Beth muses about living in Paris, adding that there’s nothing keeping her in her home state of Kentucky.

“The possibilities are endless,” she says.

“One of those possibilities is staring at you,” Cleo replies, again throwing Beth, who assumes Cleo is referring to the palpable energy between them. Cleo nods to a couple of men across the room, and Beth rejects the notion that they’re interested in her.

“No, they’re looking at you,” she says, adding to the mutual admiration and compliments the women have engaged in since first meeting in Benny’s apartment.

Cut to the next morning when Beth is late for the most important match of her life. As she pops two of the pills to which she’s addicted, chasing them with a mini bottle of booze, she eyes the bed. She rushes out of the room and the camera pans to Cleo rolling over in Beth’s bed. It’s a quick moment, and on one hand, it feeds into an old trope that lesbian or bisexual women of that era, especially, led young women astray. But Beth exhibits no pathos about her desire. Rather, she’s on to her match with Borgov, for better or for worse.

In the following episode in the series from Scott Frank (Godless) and Allan Scott, Beth, who is back from the brink of complete self-destruction after losing badly to Borgov in Paris, is in Moscow to face off against the greatest chess players in the world, including the Russian champion. There she gets an emotional lift when the only man she says she’s ever loved, Townes (Jacob Fortune-Lloyd), not only offers her moral support but helps her strategize in her match with Borgov. They begin their reunion by hearkening to an event that occurred years earlier, when Townes invited Beth to his hotel room to photograph her for a story for her for the local Kentucky paper, and his male lover walked in, complicating Beth’s feelings for him. In Moscow, Townes’s apologizes.

“I know you were angry with me. I should have told you the whole story,” he says. “I will admit, I was a little confused. You really are something. But what I really wanted was for us to be friends. And you kind of broke my heart.”

Chess is the centerpiece of The Queen’s Gambit, but with several unapologetic queer characters appearing throughout the series, it’s Netflix’s latest massive queer hit.