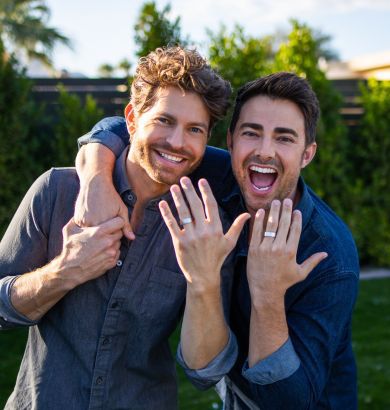 An actor in The Christmas House, Bennett says he can’t wait to get married.

Looks like Aaron Samuels is officially taken. Well, the actor who played him is.

Jonathan Bennett, who rose to fame with Mean Girls, is now engaged to his boyfriend James Vaughan, an actor as well as host of the show Celebrity Page. While Bennett was away filming The Christmas House, the Lifetime holiday film that features him in a same-sex romance, Vaughan made all the plans according to a People Magazine exclusive. For the occasion, the host composed a song.

“I took a melody that up until now had only be accompanied by chopsticks on my voice notes, and got together with my friend Tanzer, who happens to be a really talented producer and my favorite person to write songs with, and said ‘Let’s make this magical for Jonathan,’” Vaughan said. “From there we got a guitar, plucked it out, and just kept building and building and building until we ended up with this huge song that I knew was the one.”

Once Bennett returned from filming, Vaughan organized a “family Christmas card” shoot that in reality was the proposal moment. There were, understandably, tears.

“What we have is really special,” Bennett said. “It’s the thing people make movies about or, I guess in this case, write songs about. I think we’ve both known since the day we met on set at Jaymes’s show that we were going to be each other’s person. It feels like family being with him. I feel like there’s nothing in the world we can’t accomplish when we are together.”

The two have been together for about three years. They first met while Bennett was promoting Halloween Wars on Celebrity Page in 2016 and Bennett asked for Vaughan’s number.