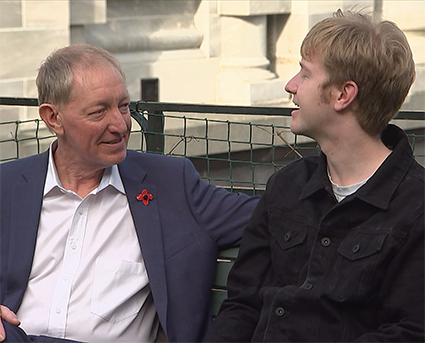 A retiring MP in New Zealand has apologised for voting against gay marriage in 2013, saying the error was “all the more personal with my 20-year-old son being gay.”

Dr. Nick Smith from the National party resigned last week, which the New Zealand Herald reports follows a “verbal altercation” in his office.

The MP was making his Valedictory speech after serving in the Parliament for 30 years.

In a speech covering the highlights of his career Mr. Smith, who joined the New Zealand parliament in 1990, said the issue of gay marriage had been one he’d got wrong.

Addressing the house in Wellington, he said, “There is an issue I got wrong. In 2013, I voted against gay marriage. The error is all the more personal with my 20-year-old son being gay. I want to put on record today my apology to New Zealand’s LGBT+ community.”

“I want to pay tribute to Louisa Wall, Fran Wilde, and Amy Adams for their leadership that has improved the lives of my son, and thousands of other New Zealanders. I also acknowledge Jenny Shipley’s courage as the first PM [Prime Minister] to attend a gay pride parade in ‘99.”

Speaking to the 1news, the MP said his son, Logan, had come out to him three years earlier. He said the two had a conversation where it was promised that before he left, the MP would publicly apologise for opposing the law.

Logan told the New Zealander broadcaster he was never worried about coming out to his dad.

Mr. Smith was one of 44 MPs who voted against the Marriage (Definition of Marriage) Amendment Bill in 2013. There was strong opposition to the bill from religious groups, as well as the country’s Conservative Party and the Family First lobby group.

The news that the bill had passed was greeted with literal song from the balconies above the Parliament. People sang the traditional Maori love song Pokarekare Ana.

Watch a TVNZ report on Nick Smith’s apology and speech below: