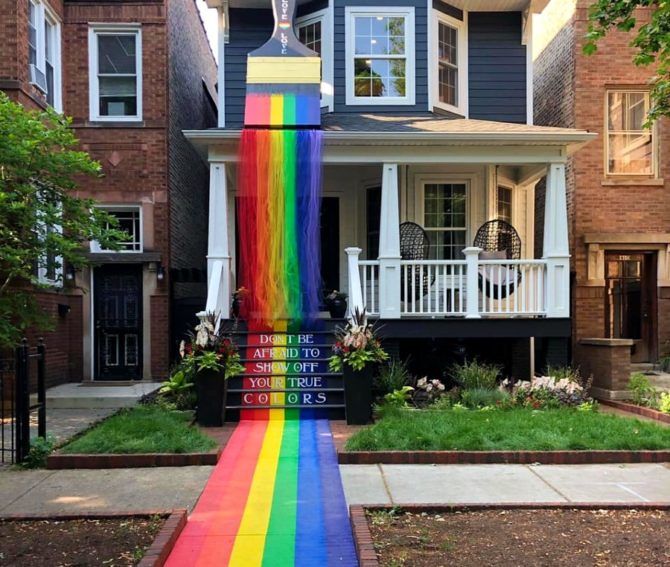 A same-sex couple in Chicago are making waves with the Pride Month display they erected outside their house.

Nicholas Vazquez and Jesse Campbell live in the Andersonville neighborhood. They told the Chicago Tribune they wanted to do something to mark Pride month for their 16-month-year-old son, Rocco.

Campbell is an interior designer. He heard a quote: “Don’t be afraid to show off your true colors,” and said it inspired him. It reminded him of a paintbrush with many colors, and he decided to make it central to their design.

He constructed a giant, styrofoam paintbrush and placed it above their porch. From this, they hung fabric strips in the colors of the rainbow. They painted their porch steps in rainbows and added the words of the quote. The set-up was finished last Thursday.

“It started off as a craft project and it just turned into something bigger,” Vazquez told Fox32.

Someone soon took a photo and posted it to an Andersonville neighborhood Facebook group on Saturday, and people soon started turning up to take photos. Vasquez says one couple drove 45 minutes to see the display.

From inside their house, the couple say they can hear parents explaining what it means to their kids.

“Kids are kids, and they start asking questions,” Vazquez told the Tribune. “I can hear them, and the parents are taking the time and explaining (Pride) to them and what this means and the colors and how this makes people feel.”

When they realized how popular the display was proving to be, the men decided to start a fundraiser. They’re raising money for The Trevor Project, which works to support queer youth and prevent LGBTQ suicide.

“For us, it’s become a way to give back to the community,” said Campbell. “There are a lot of places not as diverse as Chicago where the kids really need (the Trevor Project).”

The fundraiser, launched Monday, has already raised over $5,800 of its $10,000 goal. Last night, Jesse posted an update thanking people for their support: “We are beyond humbled by everyone’s love and generosity for supporting The Trevor Project. Thank you all so much, and please share so we can hopefully reach and surpass our goal!”