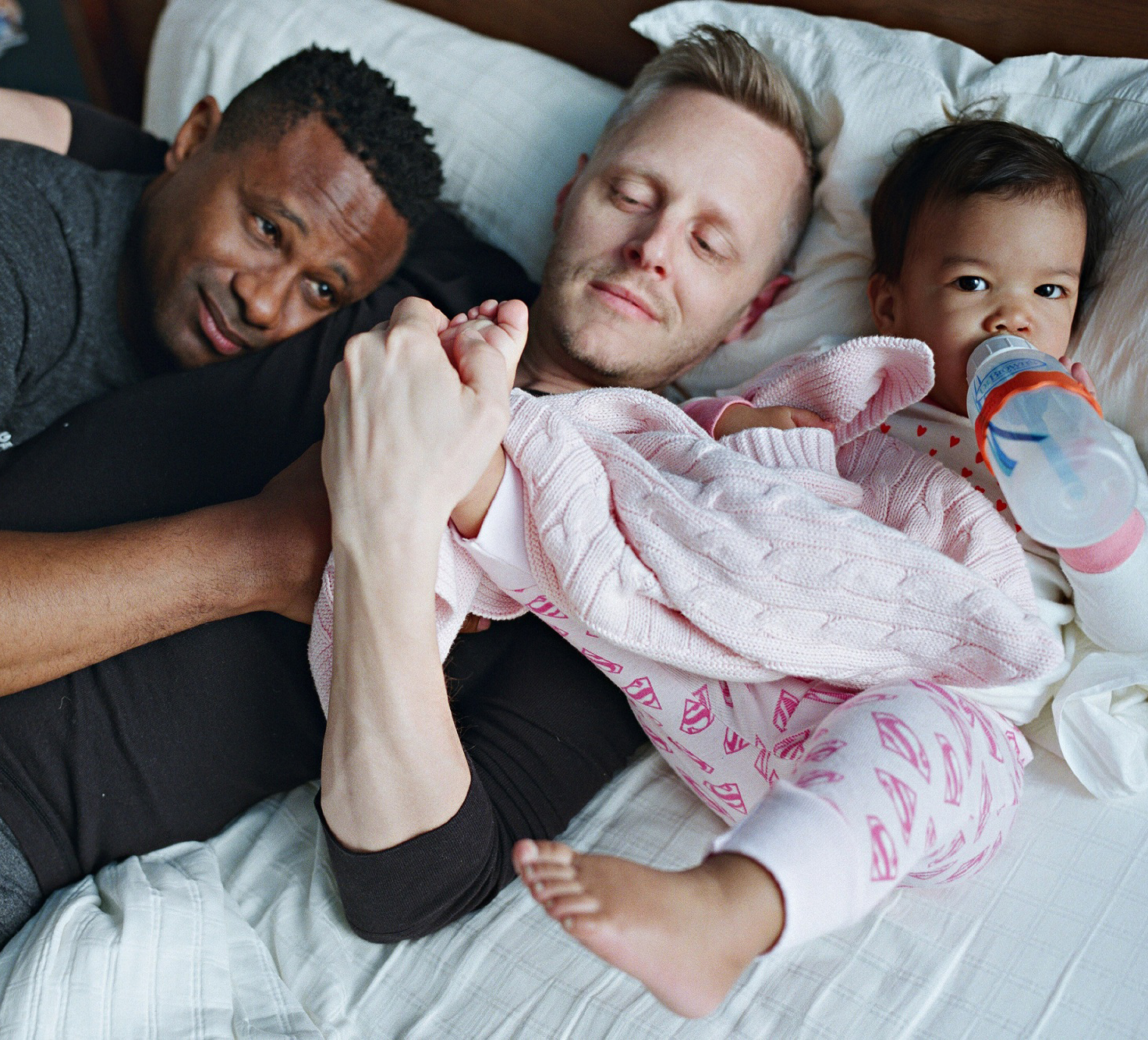 Belgian photographer Bart Heynen traveled across the United States to document the daily lives of gay men and their children for his book “Dads.”

The question was simple: “Would you guys like to be dads?”

That’s the message Christopher Hibma recalls receiving from an old friend on Facebook in early 2015. She was reaching out on behalf of her daughter, who was pregnant at the time but “not quite ready to be a mother.”

Hibma was initially resistant to the idea, so he did not immediately share the unexpected inquiry with his husband, Harrison Thompson, until he casually mentioned it over food and drinks with friends a few weeks later. Thompson was stunned by the news, but like his husband, he also didn’t think it was feasible, as the idea of a child did not fit into the fabric of their lives.

Things started to change, however, when they hosted Thompson’s 9-year-old nephew for a week and realized the shared experience of caring for a child was a beautiful thing, Hibma said. Over the course of that summer and into autumn, they pursued the adoption process and became the parents of a baby girl, Genhi.

Their story is one of many told in a new photography book called “Dads” by the Belgian photographer Bart Heynen.

Heynen and his husband were living with their two children in New York when he felt the need to foster a sense of community.

“I really wanted to meet more gay dads,” Heynen said of why he started the project.

He saw, too, that friends of his children were asking questions about where their mother was. Heynen envisioned the project as a way to help not just his own family, but other gay fathers and their families as well. Given his own experience and understanding, Heynen knew that he would have an easier time gaining the trust of fathers he hoped to photograph.

The project, which will be released on June 29 by PowerHouse Books, has the feel of a family album with its mix of posed portraits and candid documentary photographs.

In one picture, Hibma, Thompson and Genhi are lying in bed. Hibma is cradling Genhi’s foot in one hand, and holding Thompson with the other as they both look lovingly at her. It’s a tender moment that is familiar to any new parent.

The book is notable, too, for its diversity, both in who Heynen photographed and the range of their stories — as there are many roads to fatherhood.

For Hibma and Thompson, their road was through adoption by way of a chance message on social media.

Devon Gibby’s path was one that some might consider to be more conventional: He married a woman, and they had children. As time wore on, however, Gibby’s acceptance of himself as a gay man collided with his marriage and his Mormon faith. Yet, he said it changed nothing for him about being a father.

“I’ve always wanted to be a dad,” Gibby said. “The idea of having kids with another man was not even an option to me. Awareness is not always there when you just don’t have other role models that are gay parents.”

Gibby’s story is told across five photographs in the book. The first shows Gibby at 8 years old in a family photo. The second is a portrait where he seemingly blends into the vast Utah landscape. In the third, he exudes optimism as he’s about to make his weekly journey from his apartment in Salt Lake City to Logan, Utah, where his children live with his ex-wife. In the fourth, Gibby is spending time with his children in a hotel, as that’s their ritual. In the fifth, Gibby is silhouetted against the late-day sun, a deeply contemplative and evocative image that speaks to his journey.

His hope is that his story can help those who might be struggling like he did before he came out, especially for those living in parts of the country where acceptance is harder to come by.

“I would just hope that people would see me, someone living in Utah, and be able to relate to that and find some inspiration in that to be who they are,” Gibby said.