How Gay Is Pixar’s Luca? 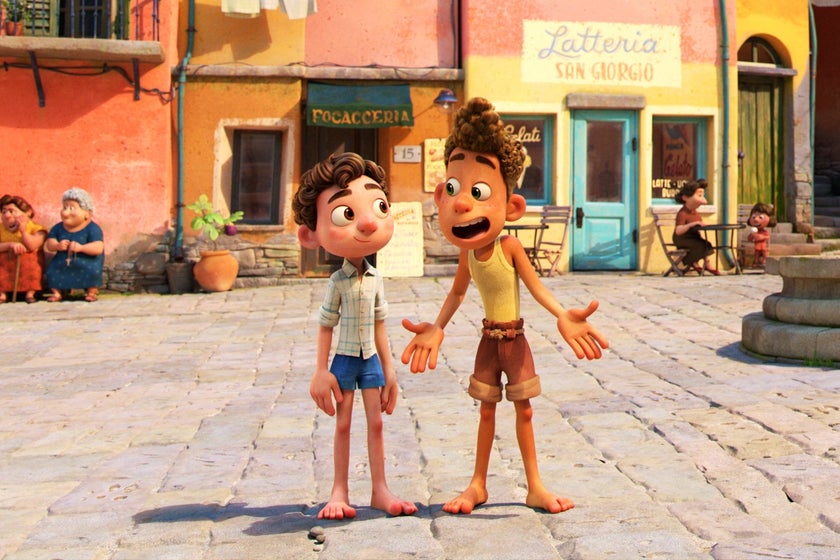 When director Enrico Casarosa says he didn’t intend to make Luca a gay romance, I believe him.

The first trailers for the movie—about two boys, one more worldly than the other, growing closer while sharing swims and bike rides in the Italian countryside—invited some inevitable jokes about it being a kiddie Call Me by Your Name. And these jokes were only further encouraged by the fact that the new Pixar movie shares a name with that Oscar-winning queer romance’s director, Luca Guadagnino. But Casarosa has insisted that the movie’s central relationship is purely platonic. “I was really keen to talk about a friendship before girlfriends and boyfriends come in to complicate things,” he said at a press event. According to him, this coming-of-age story takes place in a “pre-puberty world.” The Call Me by Your Name-esque elements, he says, were based instead on his own experiences growing up with a childhood friend in Genoa. The name Luca, meanwhile, is surely another coincidence, since Luca is a very common Italian name.

OK, but isn’t it still a little bit gay? Even beyond the superficial similarities to Call Me By Your Name, it seems, at the very least, open to interpretation. There’s no doubt that Luca offers an allegory about identity, passing, and the way people fear others who are not like them. In this case, the two boys’ true identity just happens to be their hidden natures as sea monsters. The titular character, a young sea monster, disobeys his parents and ventures above the surface, where he forms a close relationship with fellow sea monster Alberto. They have their share of moments that could be easily interpreted as puppy love, such as when they’re stargazing with their arms around each other, and their secret time together is liberating for them. It’s also forbidden. When Luca’s mother finds out about it, she doesn’t understand, and she’s afraid for him. She threatens to send him further into the depths—away from land, but also from Alberto’s influence.

The two boys run away together to the nearby town, where they are again misunderstood and must hide their identities from the hostile townspeople. Luca wants to attend school, but, as Alberto reminds him, there will always be a risk of ostracization—even violence—if the others find out what he really is. Alberto is also jealous of Luca’s burgeoning relationship with a local girl, Giulia. And when Alberto comes out, so to speak, as his true self, he is stung by Luca’s choice to throw him under the bus and remain closeted. The movie’s climax arrives when Luca finally decides to stand with Alberto and reveal his own identity. This in turn sparks defenses from their allies (including Giulia), and sets off a domino effect in which other members of the provincial town, including a pair of older women, announce that they, too, are sea monsters.

As an allegory for the closet, it’s a messy one, to be sure, and the experience of hiding parts of your identity has never been exclusive to the LGBTQ community. In the eyes of some viewers, the movie may come across an allegory not about sexuality but about race, or gender identity, or immigration status, or simply feeling out of place.

Still, there have been so many similar discussions about queer identity in Disney movies that you can almost predict the discourse ahead of time: “They’re gay!” “But why do they have to be gay? Isn’t it healthy to have a movie with two boys showing affection for each other without making it romantic?” “But why can’t they be gay?” It’s the same loop that played out with movies like Frozen and Brave. (“Why does a girl not wanting an arranged marriage mean she has to be a lesbian?” “Why shouldn’t she be a lesbian?” Repeat ad infinitum.)

Disney’s track record here doesn’t help matters. For both live-action and animated movies, the studio has overhyped what have become known as “exclusively gay moments,” tiny morsels of representation that are either so subtle you hardly notice them (a kiss between two women in the background of a Star Wars movie) or so plot-irrelevant that they can be easily chopped or overlooked by international censors (here’s looking at you, Endgame’s unnamed Grieving Man). Pixar at least seems to have learned a lesson about making too much of these moments: In Onward, an extremely minor character mentions having a girlfriend, but the character is still just that—extremely minor—even if the filmmakers were smart enough not to herald this development by tooting their own horns. Meanwhile, while Disney has congratulated itself and claimed to blaze new trails, plenty of other animation studios have been miles ahead of them: Laika’s ParaNorman, for example, featured an openly gay character way back in 2012.