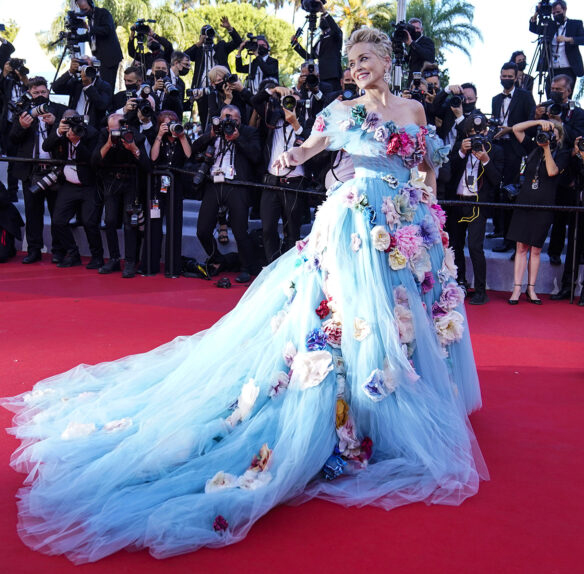 VATICAN CITY (RNS) — Hollywood’s ultimate femme fatale, actress Sharon Stone, has spoken up once again regarding the Catholic Church’s position on homosexuality, this time urging the Vatican Curia to listen to what, in her view, is Pope Francis’ push for the inclusion of LGBTQ Catholics.

“On gay marriage, on adoptions for singles, on various fronts, I want to say: Listen to your pope and respect him!” Stone told the Italian daily La Stampa, while attending the film festival at Cannes, France.

In the wide-ranging interview, published Tuesday (July 20), the actress portrayed Pope Francis as a supporter of LGBTQ rights who is embattled with a hostile Curia. “The church should open its doors to LGBTQ Catholics and the curia should accept the directives of this pope who is wonderful,” she said.

“God sent him to them, listen to God,” she concluded.

This wasn’t the first time Stone voiced her sympathies for the Argentine pontiff. In a tweet last year, she praised Pope Francis for his scientific education and great spirituality: “I am not Catholic but I am a believer!”

Pope Francis has been a proponent of adopting a pastoral and welcoming approach to LGBTQ Catholics since his famous phrase in 2013 regarding homosexual priests, when he asked “who am I to judge?” While the pope has privately met with LGBTQ Catholics and assured them of his compassion, he has publicly expressed his opposition to adoption by gay couples.

In a 2020 documentary about his life, called “Francesco,” the pope was heard saying he supported civil unions for gay couples, but many contested the interview and some media outlets claimed it was manipulated. As a bishop in Buenos Aires, Argentina, Francis drew a clear distinction between civil unions and the institution of marriage, which, according to Catholic teaching, can only occur between a man and a woman.

Stone’s interview also touched on the debates taking place in Italy around a law criminalizing homophobia. The law has received backlash from the Italian Catholic bishops, who believe it infringes on religious freedom. In a diplomatic note sent to the Italian ambassador, the Holy See claimed the law violated the Lateran Treaty, signed in 1929 and establishing the relations between the two countries.

In May, the actress spoke remotely at the international conference “1 Health 4 All,” organized by the Vatican’s COVID-19 commission and the Dicastery for Integral Human Development, led by Cardinal Peter A. Turkson. The summit addressed global health issues and the environmental crisis, with the participation of popular icons, including Bono, leader of the rock band U2, and Nobel Peace Prize laureate Tawakkol Karman.

Though Stone never met with Pope Francis, she did have a close encounter with the fictional Pope John Paul III, played by John Malkovich in the TV series “The New Pope,” directed by Paolo Sorrentino. After a few references about crossing her legs, Stone, playing herself, had a chance to make her plea for LGBTQ inclusion to a white-clad Malkovich.

To which Malkovich quips: “Alas, the Bible is not an iPhone.”