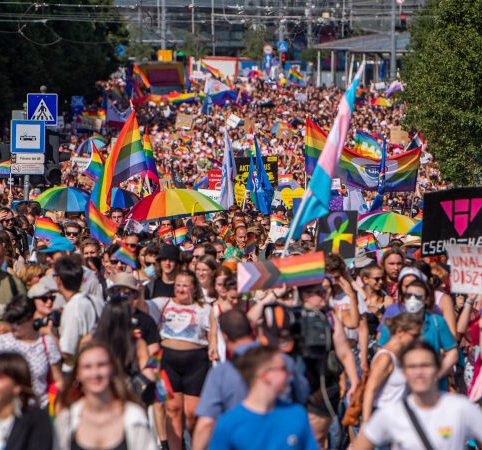 Thousands of Hungarians marched in Budapest’s biggest Pride parade on Saturday (24 July), amid tension sparked by a series of anti-gay steps by prime minister Viktor Orbán.

After an “anti-paedophilia” law was adopted by parliament last month, Orbán’s critics at home and in Brussels have accused him of conflating paedophilia with homosexuality.

“Many people are dismayed at the new law and the anti-gay propaganda,” Johanna Majercsik, a spokesperson for the Budapest Pride organiser, told AFP.

“They want to show their support for the LGBTQ community,” said Majercsik, adding that this year’s Pride was the biggest in its 26-year history.

According to an AFP photographer, more than 10,000 people took part in the colourful parade which moved along a main boulevard before crossing the Danube river to finish in a park.

Although Orbán portrays the bill as protecting children, LGBTQ leaders say it stigmatises gay people and aims to shore up the premier’s radical right-wing support ahead of an election next year.

“I’ve never been at a Pride before, although I always rooted for LGBTQ people and understood their problems,” said Zsofi Varadi, a 46-year-old mother of two, before putting on a rainbow-coloured T-shirt.

“But this year I really got angry as there is so much propaganda against them, they need to see many people supporting them,” Varadi told AFP before heading off on the parade which passed off peacefully.

Rainbow-coloured flags hung from several balconies on buildings along the route, while placards carried by the marches mocked Orbán and his ruling party Fidesz whose lawmakers introduced the bill to parliament.

Orbán said Wednesday that a national vote would be held to gauge domestic support for the law after the European Commission launched legal action against Budapest over the measure.

A group of around 200 counter-demonstrators along the route held banners reading “Stop LGBTQ paedophilia,” and shouted homophobic insults over lines of police who separated them from the marchers.

“The anti-paedophilia law has given patriots like us a weapon to protect our children from deviants like them,” a speaker told counter-demonstrators through a megaphone.

Since the law was approved by the Fidesz-dominated parliament on 15 June, several homophobic attacks have been reported in local media, while LGBTQ activists warn of growing fear in their community.

“It’s kind of scary to be honest, to be myself as a gender fluid person, you can be beaten up or stuff like that,” said Artur, a 16-year-old marcher.

“Pride marches in eastern Europe especially are less about celebration and more about protest, with more to protest against every year,” said Luca Dudits, 24, who co-heads LGBTQ rights group, Hatter Society.

“It is now more important than ever to take to the streets together in this fight for the rights and freedom of LGBTQ people,” Dudits told AFP.

Several dozen ambassadors based in the Hungarian capital also attended the march, after over 40 embassies and foreign cultural institutes issued a joint statement of support for LGBTQ rights earlier this week.

The latest legislation is seen by its supporters as part of Orbán’s project since he took power in 2010 to reshape Hungary into a so-called “illiberal” socially conservative bastion.

The latest law was originally limited to tougher action against child sexual abuse, but its final version banned the “depiction or promotion” of homosexuality and gender reassignment to under-18s.

The referendum called by Orbán would comprise five questions, including asking citizens if they agree that schools should be permitted to “talk about sexuality to their children without their consent”.

It will also ask participants if they support “the promotion of sex reassignment treatment for minors” or the “unrestricted exposure of children to harmful sexual content”.

No date has been set for the referendum.