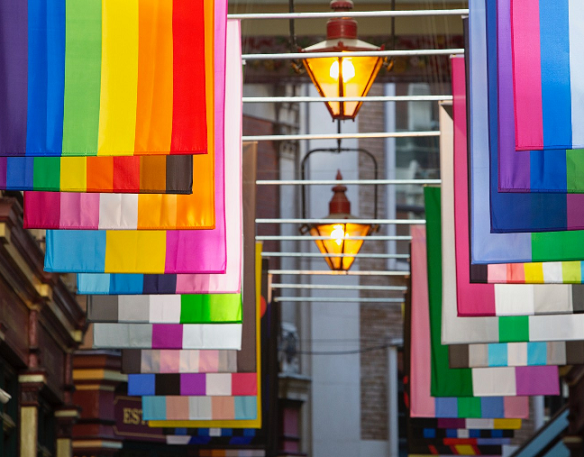 The rainbow, which is still perhaps the most commonly known symbol for the LGBTQIA+ community, has gone through a cultural tug of war over the years.

Who owns the rainbow? What value does the rainbow have in the gay community today? Does the Pride flag have any relevance anymore?

These are questions that filter through my thoughts daily. Certainly, the rainbow is still perhaps the most commonly and widely known symbol for the LGBTQIA+ community. And, yet, it has gone through a cultural tug of war over the years since it was first developed in San Francisco, in 1978, by Gilbert Baker, Lynn Segerblom, and James McNamara.

Since that time, the Pride flag has become the basic model for numerous flags representing the spectrum of identifications via gender, sexuality, and fetish. Some might say it has been overproduced and lost its meaning even within the gay community. A new and somewhat controversial version appeared in Philadelphia in 2017 with black and brown stripes to represent people of color, then an updated Progress Pride flag by Daniel Quasar in 2018 included these stripes, plus the colors of the Trans Pride flag, and now there is a third version, made by Valentino Vecchietti in June 2021, riffing on Quasar’s version with the addition of the Intersex Pride flag designed by Morgan Carpenter in 2013. It seems like the Pride flag changes just as quickly as the latest smartphone. Does that make the original Pride flag outdated?