He’s His Son, He’s Straight, And He’s From Kansas. 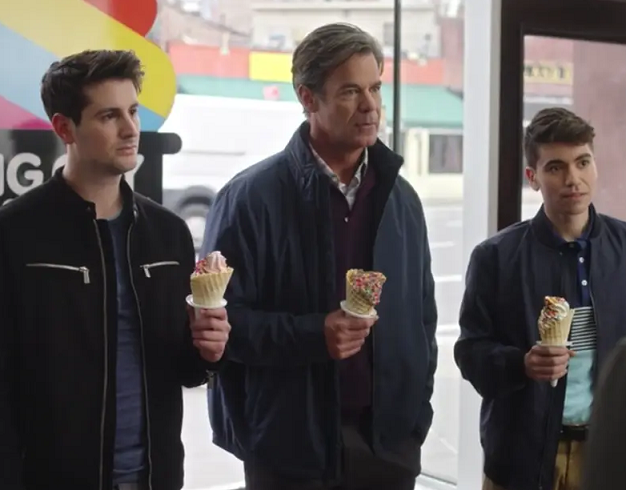 The Other Two co-creator Chris Kelly and actor Noam Ash talked with BuzzFeed News about the episode that left gay viewers reeling.

While on vacation last week in the LGBTQ mecca of Provincetown, Massachusetts, a group of friends and I sat down to watch The Other Two. We’d been positively drowning in gay culture all week, but we were still not prepared for the show’s most recent episode: an almost Shakespearean comedy of errors involving Grindr, “dad/son” couples, and threesomes that felt like something we’d never seen before in a mainstream TV comedy. It was at once shocking and yet also strangely moving.

“The storyline is so stupid and heightened and sitcom-y in a way that I really like, but we also wanted to land it emotionally,” show co-creator Chris Kelly told me in a phone call on Monday, “to make sure that it was an over-the-top comedy of errors but also make sure that there were reasons we were doing it.”

The Other Two — now on HBO Max after a switch from Comedy Central and an extensive filming delay caused by the pandemic — never shied away from gay storylines in its first season — as the older brother to a famous teen pop star (Case Walker), Cary (Drew Tarver) always seemed deeply uncomfortable with his homosexuality, hooking up with his “straight” roommate (Andrew Ridings) and exploiting a gaggle of Instagays. Writing for BuzzFeed News, Manuel Betancourt declared The Other Two “one of the best shows about gay men on TV right now,” making specific reference to an oddly sweet interaction between Cary and a love interest (Daniel K. Isaac) during a date about who was going to “eat the pizza” (i.e., top) and who wasn’t (i.e., bottom).

But this season’s second episode that was released on Thursday, “Pat Connects with Her Fans,” reaches new exploratory depths of gay sexuality. In it, Pat (Molly Shannon) hosts an episode of her new talk show in which she lavishes a $25,000 check from Shutterstock on a young man named Eddie (Noah Galvin) who has recently come out to his anti-gay father, Troy (Tuc Watkins). (“You can learn more about how much Shutterfly loves you by going to their website and scrolling waaaaayyyy down to the bottom,” Pat tells Eddie in a line that rings exceptionally true in the months after Pride).

PrevPreviousThe WHO is tracking a new COVID-19 variant.
NextCamp True Colors gives LGBTQ+ teens a place to be themselves.Next