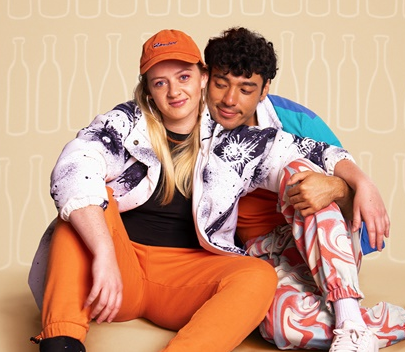 Iggy & Ace is the story of two gay best friends — and their drinking habits. Their favourite hobbies are happy hour pub crawls and getting wasted on wine while watching Bondi Rescue.

As far as they’re concerned, life is sweet. But a panic attack while hungover at work makes Ace (Josh Virgona) wonder if this is healthy.

Delirious and trying to change, he signs up for a sobriety support program — much to the horror of Iggy (Sara West).

In many ways, Iggy & Ace is a zany drama-comedy blend about recovery and friendship. But this series is also committed to portraying the rough ups and downs of addiction, toxic friendships, grief, trauma and love.

It’s a wild ride, but one certainly worth taking, even if your brain might start screaming it wants to get off at the most emotional and visceral low points.

There’s something satisfying about how grimy, disastrous and flawed Ace and Iggy are allowed to be. It is validating to see the viscera of messy queer experience.

The series feels wonderfully like a queer story for a queer audience: authentically depicting the human problems of its gay protagonists without playing into familiar media stereotypes, and without being afraid to colour outside the lines.

All the queer characters in this series are heightened for comedy, yet also feel very real.

Iggy is a rude, self-destructive disaster of a woman in deep denial about her own traumas. Ace is insecure and impressionable, prone to impulse decisions and easily distracted by instant gratification.

There’s also Iggy and Ace’s mentor, self-described “dying queen” Otto (Dalip Sondhi), who is constantly snorting cocaine (with the help of an elegant and irritable non-binary carer, played by Aiden Hawke) and reminiscing about the old days.

There’s Justine (Joanna Tu), Iggy’s long-suffering girlfriend, who’s just trying to make it as an artist and stick to her vegan diet. There’s Gwen (Roz Hammond), the frazzled older lesbian doing her best to hold the sober support group together while everyone’s personal drama piles up at her door.