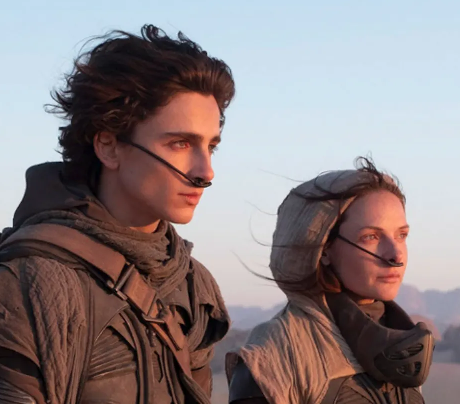 If Lawrence of Arabia director David Lean ever made a sci-fi movie, it would probably look a lot like Dune, possibly the most ambitious genre movie since Lord of the Rings.

Director Denis Villeneuve cements his place as one of the rising auteurs with his adaption of Frank Herbert’s classic novel about commerce and political machinations in the year 10,191. The sprawling cast list and labyrinthine plot aren’t easy to condense, though the basic gist is thus: in the future, mankind has colonized a huge portion of the universe using a chemical spice as a means of space travel. Said spice is only found on one planet, and two ruling clans vie for control: the brutal Harkonnen, led by a sociopathic Baron (Stellan Skarsgård), and the egalitarian Atreides, led by Duke Leto (Oscar Isaac). Amid the conflict, Leto’s son Paul (Timothée Chalamet) begins to experience prophetic visions, suggesting he could be a long-prophesied super-being.

If nothing else, Dune wins its place as a masterpiece of adaptation, truncating roughly half the novel into its runtime to expand the book’s monomaniacal focus on Paul into a more ensemble narrative. Villeneuve also updates some of the novel’s dated elements, racially and gender-diversifying the cast, and eliminating the book’s homophobia. Herbert’s novel portrays the Baron as an incidental homosexual—something the 1984 film version by David Lynch radically amped-up (seriously…it’s one of the most homophobic movies ever made, folks). Here, Villeneuve keeps the Baron’s sexuality subtle, but evident. Chalamet again proves himself one of the best actors of his generation in the lead, while supporting players David Dastmalchian (as a creepy human calculator called a “mentat”) and Sharon Duncan-Brewster (as a native paleontologist), almost steal the movie outright. With a visual style that resembles a National Geographic from the distant future—brightly-lit images that look totally real, even when CGI—as well as scenes of Chalamet and Isaac scantily clad, we recommend seeing Dune in IMAX wherever possible. The movie is an epic reminder of how magical the cinematic experience can be, and one of the best films of the year.