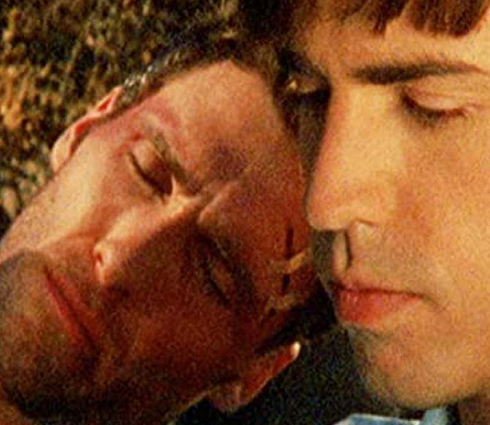 A timely look back at gay shorts through the past few decades.

‘The Male Gaze’ has been one of the strongest strands to come from NQV Media and for the latest instalment in the franchise, things are a little bit different. Rather than pooling together themed shorts from recent years, ‘The Male Gaze: Celluloid Dreams’ is taking a timely look back at shorts made from 1985 through to the present day. The seven short films included here were all shot on 35mm and 16mm film, and it’s a fascinating look at how the stories of gay men haven’t changed all that much despite laws changing and the attitudes of society evolving.

‘The Male Gaze: Celluloid Dreams’ opens with the 4-minute short ‘Just Out of Reach’ by Jonathan Wald. Despite its short run-time, ‘Just Out of Reach’ packs quite the punch as a young man climbs out of bed following a sexual liaison with an older man and tries to sneak out. Barely any dialogue is spoken between them but once it is, a whole new context is given and it proved to be, for my anyway, a little bit of a surprise. Second short ‘Toto Forever’ by Roberto F. Canuto is a very different beast and it explores a doomed affair between a young postman and a gangster. You know from the start things aren’t going to end well but over the 14 minutes, a more complex story than you might expect unravels and it’s one of the highlights here.