U.S. finally reopening its borders after 20 months of COVID restrictions 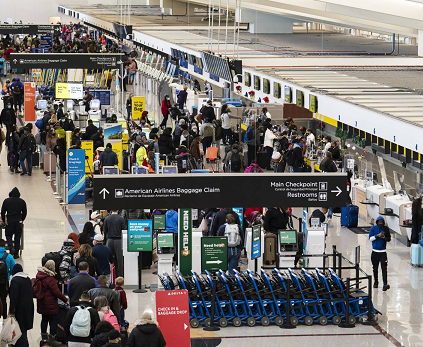 The United States reopens its land and air borders Monday to foreign visitors fully vaccinated against COVID-19, ending 20 months of restrictions on travel from around the globe that separated families, hobbled tourism and strained diplomatic ties.

The ban, imposed by former President Donald Trump in early 2020 and upheld by his successor, Joe Biden, has been widely criticized and become emblematic of the upheavals caused by the pandemic.

The restrictions were particularly unpopular in Europe and U.S. neighbors Canada and Mexico.

In an effort to slow the spread of the coronavirus, U.S. borders were closed after March 2020 to travelers from large parts of the world, including the European Union, Britain and China, India and Brazil. Overland visitors from Mexico and Canada were also banned.

The months of restrictions affecting hundreds of millions of people helped fuel both personal and economic suffering brought on by the COVID-19 pandemic.

The British woman plans to fly Monday to see her son in New York, after 20 months of separation.

Families on both sides of the Atlantic are eager to reunite with their loved ones.

Although travel from the United States to Europe has been possible since the summer, foreign U.S. residents holding certain visas have had no guarantee of re-entry.

To cope with surging demand, airlines have increased the number of trans-Atlantic flights and plan to use larger planes, as they work their way out of the pandemic crisis.

Along the border with Mexico, many cities in the U.S. states of Texas and California have faced economic struggles due to anti-COVID trade restrictions.

Authorities in Mexican border cities warned Sunday there would be long lines at crossings. The reopening also caused a shortage of dollars in currency exchange centers in Ciudad Juarez.

The Ciudad Juarez government has implemented a special system to direct traffic, including installing portable toilets on the three bridges crossing into the United States “as waiting times of up to four hours are estimated,” said the local director of road safety, Cesar Alberto Tapia.

In the United States’ northern neighbor, seniors will be able to resume their annual trips to Florida to escape the bitter Canadian winters.

But the cost of PCR tests Canada requires for cross-border travel — up to $250 — can be prohibitive.