Authorities Searching For Person Who Set Fire to Pulse Memorial 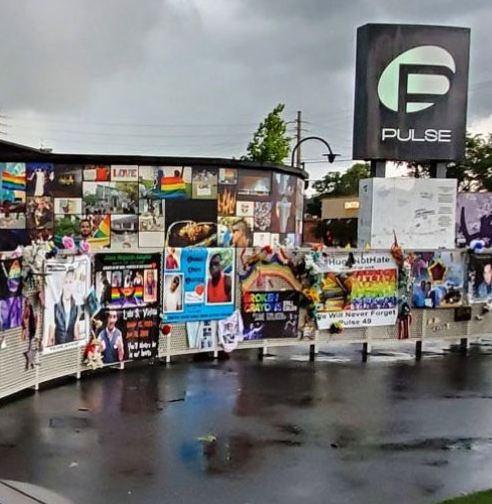 Police and local activists have asked for the public’s help in identifying the person who set fire to a portion of the Pulse nightclub memorial in Orlando, Florida last month.

The onePULSE Foundation confirmed the arson attack, which took place in the early evening of October 12, and posted video to social media showing a person in a wheelchair setting three Angel banners and other items ablaze before leaving the scene.

“Fire investigators are working the case,” Jenny DeSantis, spokesperson for the Orlando Fire Department, was quoted by USA Today. “This is an open and active investigation.”

Nobody was hurt in the blaze, which was confined to a small section of the wall and mostly burned itself out before a passerby extinguished the remaining flames. The rest of the memorial remained unharmed in the attack.

The video appears to show the back of an unidentified person in a wheelchair as they try to set fire to banners and other loose items at one section of the flowing memorial wall. At one point, the person backs up quickly as the flames grow suddenly in size, and then he quickly wheels away. At no point is the face of the alleged arsonist visible in the video.