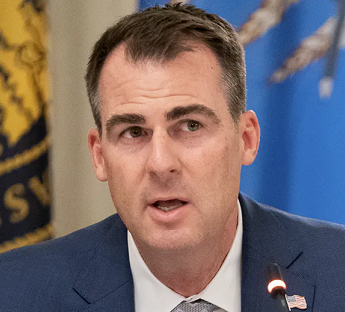 Heads rolled because ““I believe that people are created by God to be male or female. Period. There is no such thing as non-binary sex.”

The governor of Oklahoma has ordered the state to stop issuing birth certificates with a non-binary gender marker just weeks after he was apoplectic after finding out that the state recognized non-binary people. A senior state official resigned as well.

Last month, Gov. Kevin Stitt (R) found out that the Oklahoma State Department of Health (OSDH) issued a birth certificate with a non-binary gender marker to Kit Lorelied, a non-binary person born in Oklahoma who is now living in Oregon.

When Stitt and Republican leaders found out, they quickly denounced OSDH.

“I believe that people are created by God to be male or female. Period,” Stitt said in a statement. “There is no such thing as non-binary sex and I wholeheartedly condemn the purported OSDH court settlement that was entered into by rogue activists who acted without receiving proper approval or oversight.”

Oklahoma Health Commissioner Dr. Lance Frye said that the settlement was reviewed by the state attorney general, and he sounded like he planned to stay in his leadership position at OSDH to work out a new settlement “should a challenge to the previous agreement be made.”

The very next day, Dr. Frye resigned without saying why. A spokesperson for OSDH said he “felt it was time to move on.” Gov. Stitt praised Dr. Frye’s work on the COVID-19 pandemic and named an interim commissioner of health that same day.

“This order ensures this unauthorized action will be corrected,” the order states. Stitt then directed the state legislature to pass a law banning non-binary gender markers on birth certificates.

“From my perspective, having the very first thing that identifies you to the world, to have that not identify you accurately, I can’t think of anything more degrading,” their lawyer Christopher Brecht said.

Brecht declined to comment on the new order, saying that the lawsuit is still active.

Nichole McAfee of Freedom Oklahoma, an LGBTQ organization, said that the governor doesn’t have the authority to overturn a legal agreement.