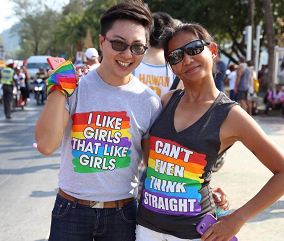 The Constitutional Court said in a statement Section 1448 of the Civil and Commercial Code – which specifies marriage as being between heterosexuals – does not contravene the constitution.

The judges made clear they believed a legislative remedy was required with a positive statement suggesting lawmakers enact laws that “ensure” equal rights for all regardless of sexual orientation and gender identity.

The court heard the case at the behest of the Central Juvenile and Family Court, where the legal challenge was made last year by Permsub Sae-ung and Puangphet Hengkham, a couple of 12 years, after Bangkok’s Phasi Charoen District Office rejected their marriage registration because they were “a woman and a woman.”

Thailand has been progressed one step forward, then two steps backward when it comes to same-sex marriages.

A bill to legalize same-sex unions – hailed by some as regionally progressive yet derided for not extending full marriage rights – has languished for years in parliament. Last year, it was shelved again for “more work.” Some lawmakers have questioned its necessity.

The verdict yesterday pushed #EqualityMarriage atop Thai hashtags on Twitter, with many netizens expressing disappointment and anger.

“Love does not discriminate. To us,denying people the right to marry just because they are of the same sex equals denying someone one of their most basic rights,” Jaoyinggx tweeted. The world is changing; and it’s time for us to move forward and embrace that change.”

Gay advocacy group Free Gender Thailand said it will organize a Nov. 28 protest against the ruling along with other organizations. The location will be announced at a later date.

Chanun Yodhong, author of Nai Nai (Gentlemen-in-waiting), a book addressing the taboo topic of King Rama VI’s relationships with his male palace servants, said the verdict hints at the kingdom’s deeply entrenched patriarchy, and the laws should be amended to pave a new way for people of all genders.

“[The verdict] seems like discrimination within discrimination. It makes the institution of marriage look feudal and something bound only to male and female,” Chanun said in an online panel discussion that took place following the ruling.