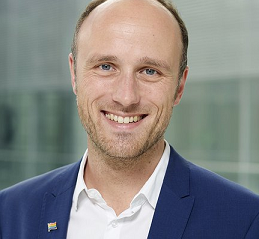 “Everyone should be able to live free, safe and with equal rights.”

The German government has appointed its first-ever “queer representative” who will look at how government policies affect the LGBTQ community.

Sven Lehmann, a member of the Green party, accepted the position of Federal Government Commissioner for the Acceptance of Sexual and Gender Diversity on Wednesday (5 January)

He will also lead a National Action Plan for Sexual and Gender Diversity.

Posting on Instagram on Wednesday the 42-year-old referred to himself as the country’s first “queer representative,” adding that the newly created office “shows the importance of embracing diversity to the federal government.”

He continues, “Everyone should be able to live free, safe and with equal rights. The new federal government will operate progressive queer politics based on the principle of self-determination and also align family politics to the social reality of different family forms.”

He also affirms that people need to be protected in law and that the “fundamental rights of trans, inter-and non-binary people need to finally be fully enforced,” calling for Germany to be a “pioneer in the fight against discrimination!”

One of Lehmann’s colleagues, Ulle Schauws, told the Deutsche Welle that Lehmann is driven by justice and that “fighting for a life free of discrimination, for acceptance and diversity is like an engine that drives him.”

The appointment has been welcomed by LGBTQ organisations in the country, including Germany’s Lesbian and Gay Association (LSVD) who say it’s an “important signal”.

In the International Lesbian, Gay, Bisexual, Trans and Intersex Association (ILGBTIA)’s 2021 Rainbow Map, Germany scored 52 percent in the organisation’s ranking of countries based on legal and policy situations.

PrevPreviousThe Pope is wrong. Choosing to have few or no children is the opposite of selfish
NextClem Sunter: The World in 2022 – five essential flags to watchNext