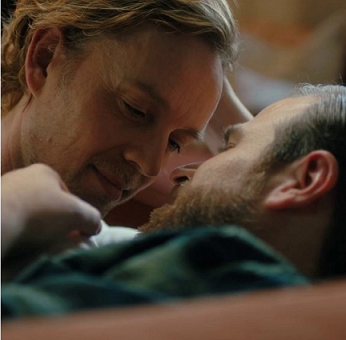 Darren Hayes will return to Australia to headline the 2022 Sydney Gay and Lesbian Mardi Gras Parade in March.

To celebrate, the former Savage Garden frontman has released his first new music in over a decade. Hayes unveiled the very cinematic video for new song Let’s Try Being in Love.

In the clip, Hayes attends a dinner party with a female partner, but he only has eyes for the male host. The other man is played by actor Scott Evans, Marvel star Chris Evans’ out brother.

“In the music video, I’m looking back on that first period of my life where I’m married to a woman,” Darren Hayes explained.

“I’m realising that in order to be free I have to destroy something beautiful and innocent.

“Scott’s character represents the freight train of my future sexuality and that’s going to emerge no matter what.

“I wanted to show I love the feminine in me, be proud of the gay me.

“There’s a dance scene that is so passionate, everything’s alive and thriving and blooming.

“That’s how I feel in general about music. And that’s a hugely sharp contrast to how I felt 10 years ago.

“I didn’t have plans to make music, it just kind of happened in a really wonderful, organic way. This whole period of being away from the public eye, taking time out was a choice.”

‘I didn’t get that experience’

Hayes said the song, and in particular, the music video is a reflection on life, love, regret and realisation.

“I’ve been married to Richard for almost 17 years, I’m in this really comfortable place in my life,” Hayes said.

“But at the same time at mid-life, I’m grieving the fact I never got to celebrate who I really was at the period of my life where I was most famous.

“I look at this world we live in now where someone like Lil Nas X can push forward his true self, full of pride and self-love, and have the chance to be loved for who he truly is.

“I was realising with great sadness that I didn’t get that experience.

“A lot of the time I was my most famous, I was deeply sad.”