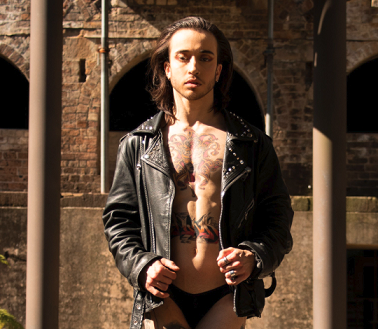 Athlete, performer and storyteller Alex Archer effortlessly weaves in and out of these roles as a full-time pole fitness instructor and revels in the beauty of teaching, noting that the student-teacher relationship is symbiotic where there is always more to learn. “You never stop being a student,” he says.

Coming from a wholeheartedly accepting and progressive family, his journey of self-discovery through sexual identity, fluidity or gender presentation was always encouraged and supported.

However, in the early stages of trying to understand who he was, the pool for finding other out and proud gay, trans men was quite small, if not altogether absent.

Archer has opened a space in the queer community, bringing light to the pole world as a trans, “mostly gay male” (he qualifies himself as a “man, loosely” as he previously identified as non-binary but has since become more comfortable with being seen as a man) and amplified the diversity and wide acceptance by people in the pole dancing world by showcasing the inclusion of trans and gender diverse people in competitions, himself included.

Not unfamiliar to the world of training and discipline with fourteen years of violin-playing under his belt and years of competitive boxing prior to pole, Archer explains that these sports were harsh on the body and “required many to fit a certain type of beauty standard.”

Archer has relished in the challenges that pole has since brought and competed in Mr Pole Dance World for the first time last year, the only men’s pole dancing competition held on a global stage, and placed runner up in the amateur division.