12 Reasons Why A Russian Attack On Ukraine Looks Imminent 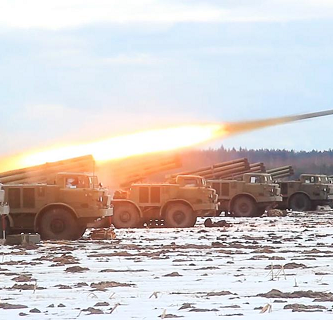 Biden administration officials revealed Friday they believed Russia was likely to undertake military action against Ukraine before the conclusion of the Olympic Games, following a massive buildup of Russian ground and naval forces begun in the fall.

Subsequently, the White House has ordered the withdrawal of diplomats and 150 U.S. military trainers in Ukraine and communicated to allies an attack might begin Wednesday.

As some of the White House assessment was based on intelligence from classified sources including signal intercepts, administration officials have refused to provide supporting evidence for fear of exposing the means used.

Though Biden has stated clearly he will not send troops to defend Ukraine, some are mistrustful of Washington’s predictions, perhaps recalling how U.S. intelligence agencies furnished inaccurate intelligence on Iraq’s supposed WMD program in the early 2000s that resulted in the disastrous invasion of Iraq.

However, between videos posted on social media and commercially available satellite imagery, there is more than ample evidence with which to conclude a Russian attack seems likely.

Does this mean war is absolutely certain? No. Putin can still call off his forces before hostilities commence and then claim Washington was jumping at shadows.

But nearly all the developments in 2022 show Russia’s military acting as if genuinely preparing to invade Ukraine. And by mid-February, the buildup appears nearly complete, with elements missing in the early stages falling into place.

PrevPreviousFlorida’s LGBTQ advocates are rallying to support young people in light of ‘Don’t Say Gay’
NextWhich Countries are Open for Tourism During COVID-19?Next