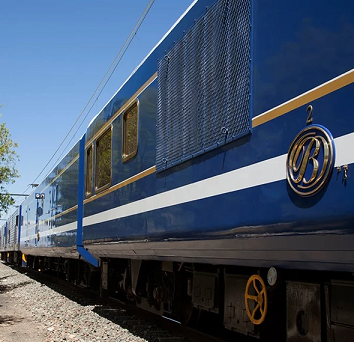 South Africa’s Blue Train, regarded as one of the world’s most luxurious railway journeys, has been suspended after coaches derailed in November and were then engulfed by flames earlier this month.

The Blue Train spent most of 2020 off the rails, due to the Covid-19 pandemic and associated lockdown restrictions, and only resumed operations in November that year. The luxury train, know for its 1,600-kilometre journey between Cape Town and Johannesburg, welcomed both international tourists and local guests aboard upon its return.

A year later, the Blue Train derailed at the Union Station Loop in Germiston, fortunately with nobody on board. The derailed coaches were transported to Transnet’s engineering facility in Koedoespoort for repairs.

One of these coaches was engulfed by flames while at the facility on 8 February. Transnet, South Africa’s rail, port and pipeline authority responsible for the Blue Train, launched an investigation into the cause of the fire. One person was apprehended while attempting to flee the scene.

Following these two incidents, and still awaiting both investigative reports, Transnet announced that the Blue Train’s operations would be suspended from Monday until further notice.

PrevPreviousHere are the 10 most inclusive colleges for LGBTQ+ students, according to a leadership nonprofit
NextMisgendering, Deadnaming BannedNext