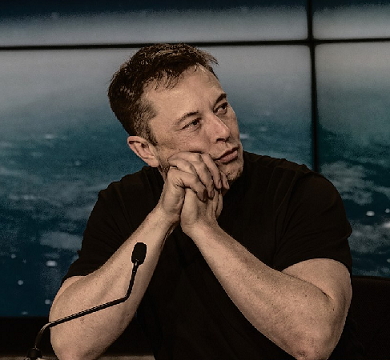 The world’s richest man has a sideline selling solar panels. He says they produce more power than a nuclear power station for the same land area. That is a towering lie.

It features an endless playlist of annoying vertical-format short videos with no playback controls other than play/pause, and no fancy functions like transcription. You don’t get to choose what to watch next. You just scroll, and some new banality pops up designed for people with a teeny attention span.

For some reason, the world’s richest man, Elon Musk, features in a lot of these shorts. It’s not directly his doing, of course. Random people grab something he said they think is profound and meme every last cent out of it.

One such person enticingly styles themselves Create Quantum Wealth, and titled the video without regard for capitalisation conventions, ‘Elon Musk Stuns Oil Giants With His Simple Solution’.

You won’t be stunned to discover that Musk’s stunning and simple solution has to do with products he sells. In particular, it has to do with solar panels.

‘The world could be powered many times over by solar,’ Musk intones.

An interviewer, acting sceptically, though probably hamming it up for the camera, asks: ‘The world? I mean, obviously California, where you’re based, but in Europe? Can you really say that? In Europe?’

That is, on the face of it, a good question, because north of the French Riviera, the sun hardly ever shines. I hear Berlin had a great summer last year, but hardly anyone could have noticed because it fell on a Wednesday.

This is why coal stubbornly remains a major source of energy in Germany, despite its rapid rollout of renewable energy plants, and especially since the closure of more than half of its nuclear plants, whereas in France, which relies heavily on nuclear power, coal is virtually obsolete.

‘The amount of energy that reaches the earth from the sun is staggeringly high. We have this enormous fusion generator in the sky that is lobbing out vast amounts of energy, and I’m talking just using land area, I mean, it’s really amazing,’ he gushes.

If your bullshit detector is ringing now, so was that of the interviewer. ‘Yes? And that’s not a conclusion just done by you?’

It’s not clear when that clip was recorded, but Musk has been saying similar stuff for years. And all of that – except that the sun is a fusion generator – is complete bunk.

In 2015, MIT published a massive study, entitled The Future of Solar Energy. ‘This study is motivated by the enormous potential of solar energy as a tool to reduce global CO2 emissions and the great importance of effecting those reductions,’ it said.

According to that study, producing all the energy the US would need in 2050 from solar panels would take about 33 000 km2, which means Elon Musk exaggerated by a factor of 165.

Practically, we’re already pretty close to the maximum efficiency of PV technology. Theoretically, albeit at great expense, the efficiency of photovoltaics could perhaps be doubled. It won’t, but let’s suppose it could be done. Then perhaps by 2050, Musk’s solar panels (he did say ‘panels’, which implies photovoltaics), could power the entire US on a land area of 16 500 km2.

Now, in the United States, all nuclear power stations together, complete with cooling ponds, buffer zones and all the bells and whistles, occupy a grand total of 872 km2. This works out to about 1 km2 per teraWatt-hour, which means supplying 100% of the US energy demand in 2050 would take approximately 4 500 km2.

That is already some four to seven times less land area than solar panels would need. Making some assumptions about next-generation nuclear power stations would reduce this land requirement to 1 320 km2. If all nuclear reactors were to occupy the same land area as the most compact facility in the United States, this could be further reduced to a mere 73 km2.

The US Department of Energy estimates that solar plants in practice require about 75 times the land area occupied by equivalent nuclear power. (For what it’s worth, wind farms require 360 times as much land as nuclear power, but the vast majority of that land is not rendered unusable, so ultimately, wind takes up only four times as much land, beating solar hands down.)

So, throughout that clip, Elon Musk exaggerates by something like two orders of magnitude. Sure, he owns Tesla Energy, so he’s a solar panel salesman, and salespeople lie, but that might be some of the worst false advertising I’ve ever seen.

I asked some Oil Giants I happen to have on speed-dial, and none of them admitted to being stunned.

‘I certainly was not stunned,’ one corporate fat cat told me over caviar and champers on his yacht.

‘Stunned? No, I don’t recall being stunned recently, or ever,’ another said, puffing on a fat Cuban cigar.

Millions of people believe Musk, though, which goes a long way to explain his extraordinary wealth, at least on paper.