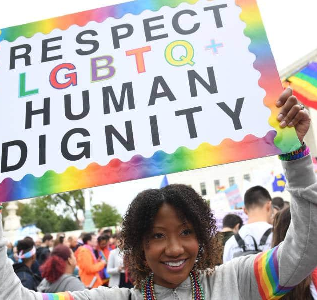 The US Supreme Court has agreed to decide whether a Christian woman who designs websites can refuse to work with same-sex couples despite a Colorado anti-discrimination law.

The court will hear a claim by business owner Lorie Smith, who is appealing a lower court ruling that rejected her bid for an exemption from a state civil rights law requiring businesses to be open to all customers regardless of their sexual orientation.

In July 2021, the US appeals court ruled against Smith, who creates custom wedding websites, after she claimed she couldn’t be forced to produce websites for same-sex marriages – a practice she opposed on religious grounds.

The Supreme Court will hear the case, 303 Creative v Elenis, No 21-476, and decide “whether applying a public-accommodation law to compel an artist to speak or stay silent violates the free speech clause of the First Amendment”.

According to the New York Times, the case will be heard by the court during its next term, which starts in October.

Smith’s lawyers at the far-right Alliance Defending Freedom said in the court filing that their client is “willing to work with all people regardless of … race, creed sexual orientation and gender”.

But they said she “cannot create websites that promote messages contrary to her faith, such as messages that condone violence or promote sexual immorality, abortion or same-sex marriage”.

The appeal also contended that the lower court “took the extreme position that the government may compel an artist – any artist – to create expressive content, even if that content violates her faith”.

However, the state’s attorneys urged the Supreme Court to deny the appeal, arguing the Colorado law doesn’t restrict free speech.

“Requiring the company to produce the same services for same-sex couples that it produces for opposite sex couples does not require it to speak in favour of same-sex marriage,” the lawyers said, Los Angeles Times reported.

Jennifer C Pizer, senior counsel with Lambda Legal, urged the Supreme Court to definitively rule on whether it is OK to discriminate against LGBT+ customers.

Pizer said the court has the opportunity to “do what the justices should have done three-and-a-half years ago” in the Masterpiece Cakeshop case, which posed a clash between LGBT+ rights and gay rights. The cake shop in 2018 won a narrow Supreme Court victory over its refusal to bake a cake for a same-sex couple.