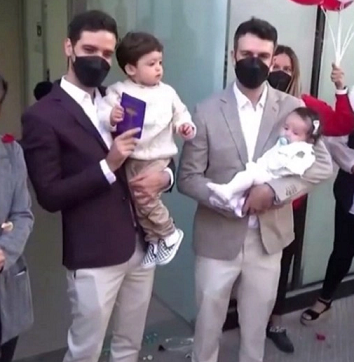 Two gay dads in Chile are the first same-sex couple to get married in their country, as the country’s new laws officially begin.

In December, the country’s parliament passed same-sex marriage legislation in a landslide vote and outgoing conservative President Sebastian Pinera signed it into law.

Javier Silva and partner Jaime Nazar were the first of three same-sex couples to legally tie the knot on the first day of the new laws.

Silva and Nazar have been together for seven years and have two young children, 20-month-old Clemente and four-month-old Lola María.

The couple wed at a civil registry office in Chilean capital city Santiago.

“Being the first couple to get married in Chile for us is an honor, something to be proud of,” Silva told the Associated Press.

“We never imagined we would experience this moment in Chile,” Nazar also added.

For three years, the couple had shared a civil union. Same-sex couples have had that option since 2015. However the civil unions only gave the couples limited rights, particularly relating to parenting.

Silva and Nazar’s marriage now allows both of them full legal status as parents to their children for the first time.

“Now our children have the same rights [as other families],” Silva explained.

“They will be able to have, we hope, a better future, [and] not be discriminated against for having two parents who love each other.”