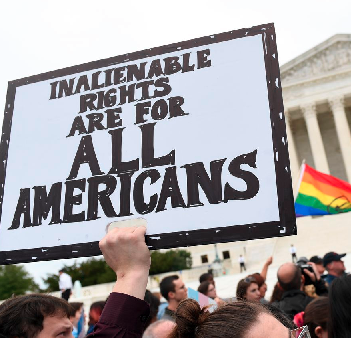 CLEVELAND, Ohio — The fabric of freedom is frighteningly frail. Our civil rights are based on 27 constitutional amendments, but the whim of a few justices can reverse them. Amazing. And scary.

Sadly, most folks can’t recite the first 10 (aka The Bill of Rights), so forget the rest. Some rights cost lives. Some come from privilege. In the end, it is up to the Supreme Court of the United States to interpret those amendments and decide our freedoms.

Some Supreme Court decisions rest on a penumbra of amendments. It takes the 1st, 3rd, 4th, 5th, 9th, and 14th to create what SCOTUS calls our right to be left alone – otherwise known as the right to privacy.

Now, Justice Samuel Alito’s leaked draft opinion, suggests the court has enough votes to abolish the constitutional right to an abortion and claims the landmark Roe v Wade decision was fundamentally wrong. Federal protection of women’s health should never have been founded on the right to privacy, the draft opinion argues. Therefore, if his opinion becomes a final decision, all rights founded on either the Roe v Wade precedent or the right to privacy are jeopardized.

Scared, yet? The LGBTQ+ community is scared. In fact, we all should be alarmed. If our right to be left alone is weakened, all of us are vulnerable.

Many think the Marriage Equality Act will be the next right ripped asunder. So, LGBTQ people are rushing to get married. Instead of wedding joy, couples are suffering disappointment, sacrifice and sadness.

Britt Orcutt, president for Flaming River Arts and community liaison for the Dorian Gray Youth Foundation is a licensed wedding officiant. She sees the reversal of Roe v. Wade as only the first domino to fall.

“I am enraged, and I am heartbroken,” she told me. “None of us believe (the Supreme Court) is going to stop at just Roe v Wade. Once they undo 50 years of law, everything will begin to unravel. Marriage equality, interracial marriage, disability rights, religious freedoms, the list goes on and on. Anyone who has ever dealt with a bully knows they never stop at just taking your lunch money.”

Britt sees weddings as times of joy — when community and family (chosen and genetic) celebrate and support the marrying couple. Now, she’s officiating elopements because couples are afraid. “Queer people should not be continuously forced to make decisions for their lives based on the whims of the government,” Britt said.

Crystal and Jessica, a cisgender lesbian couple, have decided to marry before the end of May instead of continuing to save for their dream wedding.

They told me about their trip to Niagara Falls where Crystal planned to pop the question. With videographers in place, Crystal took a knee and proposed with a Ring Pop.

Jessica’s acceptance didn’t surprise Crystal, but the kindness of strangers did. From applauding onlookers at the park to free dessert where they had dinner, she was amazed.

“The treatment we received in Niagara Falls was just like any other freshly engaged couple, and I let myself forget for a weekend, that I should expect anything different,” Crystal reminisced.

When the couple returned home, a homophobic neighbor’s abuse ramped up. She started banging on the couple’s door and screaming into their bedroom window at 7 a.m., over made-up concerns and offenses. It soon became too much. They had no choice but to move, which decimated their wedding savings. They figured they would just save up again.

Then the draft opinion surfaced.

Jessica described their reaction: “[When], we got the news that Roe vs Wade was in the process of being repealed, we knew what was coming next. One thing I appreciate about our relationship, is how we don’t hide any aspect of it. We are very openly and proudly queer. So, we immediately decided that we needed to get married as soon as possible to avoid any negative repercussions that would come from not being married. I’m not gonna lie — I’ve broken down and cried because of it.”

Again, timing will be everything. They’re planning a small, simple ceremony on May 21. And because they’ve had no time to save for their dream event, they’re leaning on friends for whatever they can offer to make it special – like photography and cupcakes. They’re hoping their wedding party can make it into town on such short notice. As they hunt for a silver lining, Jessica settles upon the fact that soon she will be married to the woman she loves, and it will be legal – no matter what comes next.

If the Marriage Equality Act is ripped apart next, gay marriages solemnized up to that point will remain lawful, but the LGBTQ community’s sense of safety is already shredded. All those marriage licenses lead straight to gay citizens, whose rights now seem very vulnerable.

When we read about atrocities throughout history, many of us adamantly claim we would have stood against them, had we been there. I’m talking about slavery, ethnic cleansing, internment camps. But how many of us would have risked our lives to defend Native Americans, Jews, Japanese Americans, Blacks, or Trans folks? When it’s in the past, especially when it’s someone else, it’s easy to think heroically.

Jessica, Crystal, and Britt are angry and scared. So am I. You should be, too.

Leslie Kouba, a lifetime resident of Northeast Ohio and mother of four completely grown humans, enjoys writing, laughing, and living in Cleveland with her wife, five cats, and a fat-tailed gecko named Zennis. You can reach her at