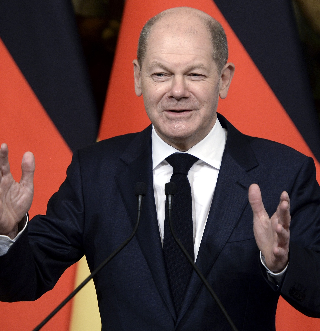 In a special address delivered on the closing day of the World Economic Forum Annual Meeting, German Chancellor Olaf Scholz delivered a scathing indictment of the Russian war against Ukraine and called for an accelerated drive towards a clean energy future.

“A major nuclear power is behaving as if it had the right to redraw borders,” Scholz said. “Putin wants a return to a world order in which strength dictates what is right; in which freedom, sovereignty and self-determination are simply not for everyone. That is imperialism. That is an attempt to blast us back to a time when war was a common instrument of politics, when our continent and the world were without a stable peaceful order.”

Scholz noted that Russia’s invasion has produced an unprecedented closing of ranks among Western nations. “Putin underestimated the unity and vigour with which the G7, NATO and the EU would respond to his aggression,” he said. “Working together, we have imposed sanctions that are tougher and further-reaching than any previously imposed on a country of Russia’s size.”

The chancellor urged leaders to accelerate the energy transition. “Now we have even more cause to move away from fossil fuels than before,” he said. “Ultimately, our goal of achieving carbon neutrality by 2045 has been given an additional boost by Putin’s war.”

He pointed to German plans to phase out imports of Russian oil by the end of 2022, adding: “We are also working flat out to end our reliance on Russian gas.” Germany plans to nearly triple its rate of emissions reductions by 2030 and increase renewables’ contribution to the country’s energy mix to 80%, by the end of this decade.

On China, Scholz said: “China is a global player – once again, we should add, because historically speaking, that was consistently the case throughout long periods of world history.” He went on: “But just as that does not mean we need to isolate China, neither does it give rise to the claim of Chinese hegemony in Asia and beyond. Particularly since we are seeing new and ambitious powers emerging in Asia, Africa and Latin America.”

Scholz also emphasized the need for the developed nations of the Global North to expand ties to the democracies of the Global South. “For too long we have practically equated ‘democracy’ with ‘the West’ in the classical sense,” he said. “Yet it was actually this Western world that denied the South its rights and its freedom in a most undemocratic manner until well into the last century. I am speaking of colonialism.”

While recognizing the need to diversify supply chains and end dependence on Russian oil and gas, Scholz listed the many benefits that globalization yielded over the past several decades. “Deglobalization is not the right way to go,” he said. “It will not work. Contrary to everything that populists grandly proclaim, it is the enterprises, employees and consumers in our countries who pay the price of customs duties and trade barriers. Those people are already bearing the brunt of soaring prices.”

Scholz called for “a sustainable, resilient globalization that uses natural resources sparingly and, above all, takes the needs of future generations into account”.