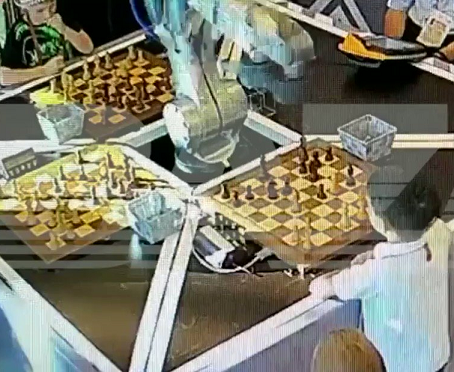 From the robo-surgeon that killed its patient to the driverless car that ran over a pedestrian.

Shocking footage emerged at the weekend of a chess-playing robot breaking a child’s finger during a match in Russia.

The robot grabbed the seven-year-old boy’s finger at the Moscow Open last week because it was confused by his overly-quick movements, Russian media outlets reported.

Sergey Lazarev, vice-president of the Russian Chess Federation, said the child had violated ‘certain safety rules’ by making a move too soon.

Lazarev said that the machine had been hired for many previous events without any problems, and that the incident was an ‘extremely rare case’.

Christopher Atkeson, a robotics expert at Carnegie Mellon University, told MailOnline: ‘Robots have limited sensing and thus limited awareness of what is going on around them.

‘I suspect the chess robot did not have ears, and that its vision system was blind to anything other than chess boards and pieces.’

Although the young chess player only suffered a broken finger, in other accidents involving robots the injured party has not always been as lucky.

MailOnline has taken a look at some of the disastrous robotic failures, from the robo-surgeon that killed its patient to the driverless car that hit a pedestrian.