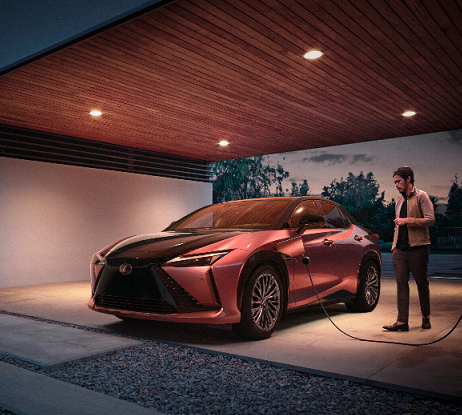 Perhaps the most striking characteristic of the new Lexus RZ is its appearance. Lexus’ first pure battery electric vehicle (BEV) stands out from the crowd because of its distinctive exterior design.

This expresses an inherent dynamism inspired by the cheetah and “seamless E-motion” characteristic of the smooth acceleration provided by electrification. More than being boldly contemporary, the RZ also signposts where Lexus is going next.

Progressive design does entail an element of risk. Not all SUV buyers want a distinctively different vehicle, and some take time acclimatising to new design directions. But where boundary-pushing designers dare to go, public taste often follows. And by embracing Lexus’ “Next Chapter” design, the RZ demonstrates the kind of automotive future the brand is aiming for. A future in which electrification technology enhances vehicle performance, offers driving pleasure, and advances the refinement and comfort of “Lexus-ness”.

Because this vision informed the core philosophy of the RZ, its exterior design suggests the ample cabin volumes of an SUV yet also the lively acceleration of an EV. SUV spaciousness is implied by the long wheelbase, with wheels pushed to the corners, and by the plentiful headroom evident in the cabin silhouette’s rearward peak. Electric-only propulsion is affirmed by the relatively low hood line and a nose that is conspicuously without a grille, because there is no internal combustion engine to accommodate or cool.

Even though Lexus’ spindle grille has gone, the RZ is instantly recognisable as a Lexus because this signature feature has been amplified into a spindle body shape. This creates a solid mass expressing a single surface which reaches from the nose towards the body. The spindle mass is accentuated by using body colour where there would traditionally be a black grille mesh area, by blacking out the body either side of this, and by giving more emphasis to the fender shape.

The fact that electrification delivers responsive, energetic driving performance is important. The basic inspiration for RZ development from Chief Engineer Takashi Watanabe was the cheetah, and this thinking is carried through to the exterior design. The RZ’s body evokes the dynamism of the fast cat when it is sprinting nose tucked down, tail high, rear legs digging in for grip and propulsion. This is seen in the RZ’s nose-to-tail stance, sinewy flanks, and the way the rear tyres appear to be kicking down at the ground. The body volume appears to push the rear tyres rearward and the rear wheel arches, like those at the front, are distinctively muscular.

Chief Designer Daichi Kimura commented: “Because the cheetah is maybe a little too direct as a motif for the car, we discussed this concept a lot and decided to express the DIRECT4 driving performance image inspired by the cheetah.”

This performance – and what’s more, the way this performance is delivered with Lexus-like smoothness – also inspired the RZ’s “seamless E-Motion” design concept. Airflow management and aerodynamic efficiency are clearly apparent in the RZ’s body mass, which has a dynamic form that visualises airflow. The ability to cut cleanly through the air is affirmed by the front grille shutters, cabin centreline and tapered surfaces, the sleek door axis expression which runs horizontally along the vehicle’s sides, and the rear roof spoiler.

That roof spoiler is comprised of two separate elements, located at the outer edges of the body width immediately behind the C-pillars. Some observers have likened this to horns. As with so many other exterior design details, this is a perfect example of function complemented by form – and that form is elegantly individual. It is for both practical and aesthetic reasons that the RZ dares to be different.

In conclusion, Lexus is committed to its carbon neutral mission. This commitment will continue with the introduction of the first Lexus battery electric vehicle (BEV). The RZ will be introduced to the South African market in the next year or so.

By 2025, Lexus International will debut 20 new or improved models, including more than 10 BEVs, PHEVs, and hybrid electric vehicles (HEVs).